– How Should We Live? Great Ideas from the Past for Everyday Life by Roman Krznaric

It’s 150 years since Leo Tolstoy put pen to paper and began writing his epic War and Peace. While most people think of him as one of the 19th century’s greatest novelists, few are aware that he was also one of its most radical social and political thinkers. During a long life from 1828 to 1910, Tolstoy gradually rejected the received beliefs of his aristocratic background and embraced a startlingly unconventional worldview that shocked his peers. Tracing his personal transformation offers some wise — and surprising — lessons for how we should approach the art of living today. 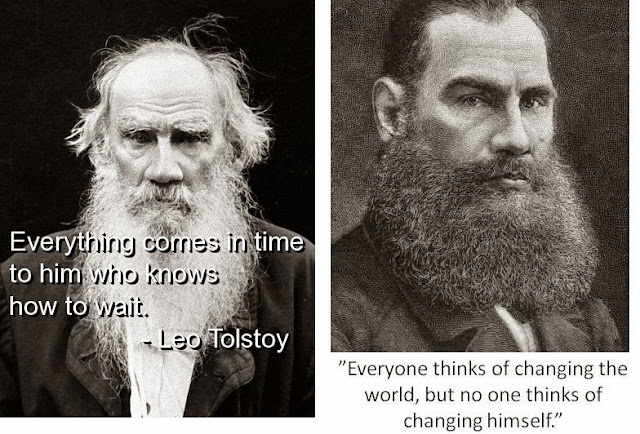 Tolstoy was born into the Russian nobility. His family had an estate and owned hundreds of serfs. The early life of the young count was raucous and debauched, and he gambled away a fortune through a reckless addiction to cards. As he acknowledged in A Confession:
I killed men in war and challenged men to duels in order to kill them. I lost at cards, consumed the labor of the peasants, sentenced them to punishments, lived loosely, and deceived people. Lying, robbery, adultery of all kinds, drunkenness, violence, murder — there was no crime I did not commit, and in spite of that people praised my conduct and my contemporaries considered and consider me to be a comparatively moral man. So I lived for ten years.
So how did Tolstoy manage to wean himself off this rather racy, decadent lifestyle? And how might his journey help us rethink our own philosophies of life?

Keep an Open Mind: One area in which Tolstoy excelled was the ability and willingness to change his mind based on new experiences. It was a skill he began nurturing in the 1850s when he was an army officer. Tolstoy fought in the bloody siege of Sebastopol during the Crimean War, a horrific experience that turned him from a regular soldier into a pacifist. A decisive event took place in 1857, when he witnessed a public execution by guillotine in Paris. He never forgot the severed head thumping into the box below. It convinced him of the belief that the state and its laws were not only brutal, but served to protect the interests of the rich and powerful. He wrote to a friend, “The truth is that the State is a conspiracy designed not only to exploit, but above all to corrupt its citizens…“ Tolstoy was on his way to becoming an anarchist. His criticisms of the tsarist regime in Russia became so vociferous that only his literary fame saved him from imprisonment. Tolstoy would be the first to encourage us to question the fundamental beliefs and dogmas we have been brought up with.

Practice Empathy: Tolstoy was one of the great empathic adventurers of the 19th century, displaying an unusual desire to step into the shoes of people whose lives were vastly different from his own. Following the growing movement across Russia which extolled the virtues of the peasantry, Tolstoy not only adopted traditional peasant dress, but worked alongside the laborers on his estate, ploughing the fields and repairing their homes with his own hands. 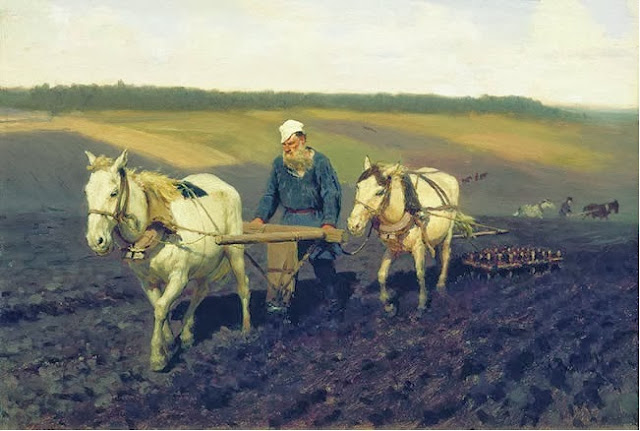 For a blue-blooded count, such actions were nothing short of remarkable. Although no doubt tinged with paternalism, Tolstoy enjoyed the company of peasants and consciously began to shun the literary and aristocratic elite in the cities. Unlike many of his fellow aristocrats who claimed solidarity with rural laborers, Tolstoy believed you could never understand the reality of their lives unless you had a taste of it yourself. Tolstoy regularly put down his pen to work in the fields.

Make a Difference: His dedication to the peasantry was nowhere more evident than in his famine relief work. After the crop failure of 1873, Tolstoy decided to stop writing Anna Karenina for a year to organize aid for the starving, remarking to a relative, “I cannot tear myself away from living creatures to bother about imaginary ones.” His friends and family thought it crazy that one of the finest novelists in the world would put one of his works of genius on the backburner. But Tolstoy was adamant. He did it again after the famine in 1891, and with other members of his family spent the next two years raising money from around the world and working in soup kitchens. Can you imagine a bestselling author today setting aside their latest book to do humanitarian relief work for two years?

Master the Art of Simple Living: One of Tolstoy’s greatest gifts — and also a source of torment — was his addiction to the question of the meaning of life. He never ceased asking himself why and how he should live, and what was the point of all his money and fame. In the late 1870s, unable to find any answers, he had a mental breakdown and was on the verge of suicide. But after immersing himself in the German philosopher Schopenhauer, Buddhist texts, and the Bible, he adopted a revolutionary brand of Christianity which rejected all organized religion, including the Orthodox Church he had grown up in, and turned toward a life of spiritual and material austerity. He gave up drinking and smoking, and became a vegetarian. He also inspired the creation of utopian communities for simple, self-sufficient living, where property was held in common. These “Tolstoyan” communities spread around the world and led Gandhi to found an ashram in 1910 named the Tolstoy Farm. 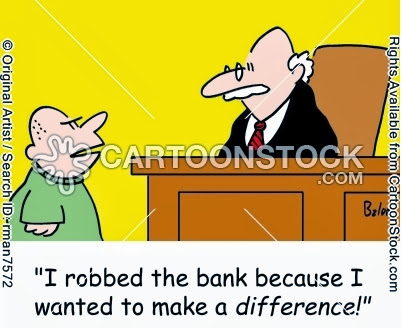 Beware Your Contradictions: Tolstoy’s new, simpler life was not, however, without its struggles and contradictions. Apart from the fact that he preached universal love yet was constantly fighting with his wife, the apostle of equality was never able to fully abandon his wealth and privileged lifestyle, and lived till old age in a grand house with servants. When he mooted the idea of giving away his estate to the peasants, his wife and children were furious, and he eventually backed down. But in the early 1890s he managed, against their wishes, to relinquish copyright to a huge portion of his literary works, in effect sacrificing a fortune. In his last years, when writers and journalists came to pay homage to the bearded sage, they were always surprised to find the world’s most famous author chopping wood with some workers or making his own boots. Given the privileged position in which Tolstoy started life, his personal transformation, if not complete, still deserves our admiration.

Expand Your Social Circle: The most essential lesson to take from Tolstoy is to follow his lead and recognize that the best way to challenge our assumptions and prejudices, and develop new ways of looking at the world, is to surround ourselves with people whose views and lifestyles differ from our own. That’s why he ceased socializing in Moscow and spent so much time with laborers on the land. In Resurrection, Tolstoy pointed out that most people, whether they are wealthy businessmen, powerful politicians, or common thieves, consider their beliefs and way of life to be both admirable and ethical. “In order to keep up their view of life,” he wrote, “these people instinctively keep to the circle of those people who share their views of life and their own place in it.”

If we want to question our beliefs and ideals, we need to follow the example of Tolstoy, spending time with people whose values and everyday experiences contrast with our own.
Our task must be to journey beyond the perimeters of the circle.