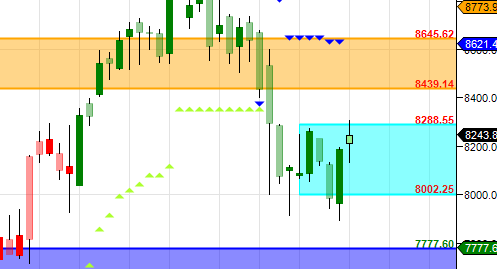 Last Week we gave Chopad Levels  of 8156, Nifty gave Short Entry on Monday but got stopped at Closing and Longs were triggred which were rewarded as Nifty did the 1 target of 8301 High made was 8306 thus rewarding Chopad Followers. Nifty was not able to close below 8156 Chopad Levels throughout the week. Lets Analyze How to trade Nifty in coming week as Result Season will start with Infosys and TCS results in coming week.

NO Harmonic pattern was observed for coming week. Nifty As per time analysis 10/13 Jan  is Gann Turn date , impulsive move can be seen around these dates. It was positive week, with the Nifty up by 58 points  closing @8243  forming Doji pattern, facing resistance at the upper end of  channel. We have another time cycle starting from 10 Jan-25 Jan . Last Cycle started from 14 Dec Nifty made a top of 8229 and corrected all the way till 7893.