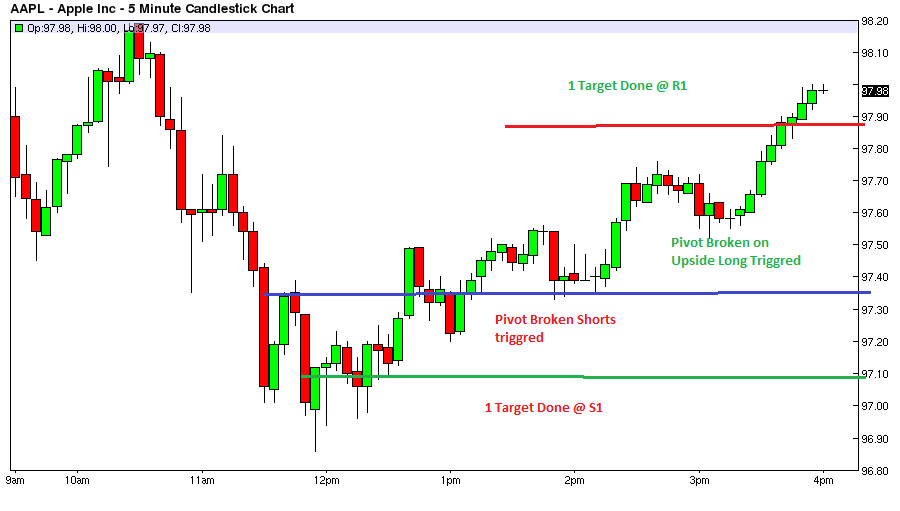 Let’s discuss the Pivot System with S&P 500 on 24th  Sep 14 and how you could have traded that day using pivot points. The first target for the trade is Resistance 1 ie.1989 , At this level a trader can either book profit or trail its position by keeping Sl at the entry price.

Now Let’s see the 5 Min Chart of AAPL  below on 08th Aug 2014 and how could we trade using the Pivot Levels to trade both long side and short side. The first target for the trade is Support 1 ie.97.11, At this level a trader can either book profit or trail its position by keeping Sl at the entry price ie 97.34.

The second target for the trade is Support 2 ie. 96.57. As seen from above Chart AAPL  was unable to move near 2 target and started coming above 97.2 and eventually triggered the Sl.

AAPL eventually reached 97.88 in last hour of trade and we booked profit.

Woodies Pivot Point levels are handy tools useful for day traders to know the potential market turning points. Pivots levels should never be used in isolation but a combination of Pivots levels with Candlestick pattern  MACD,Stochastic crossovers can increase the probability of successful trade by giving a powerful buy and Sell signal.