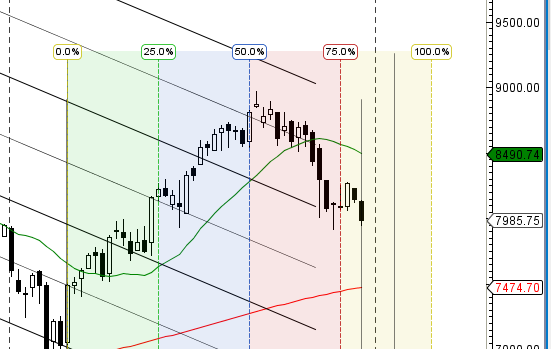 Last Week we gave Chopad Levels  of 8156, Nifty made High of 8132 on Monday giving Opportunity for Chopad Followers to Enter short trade a bit risky one as It did not touch the exact level of 8156 but rewards were also very good as it did the 3 target of 7972  thus rewarding Chopad Followers with Christmas and New Year gift 🙂 Wishing Everyone a Merry Christmas  As we approach the last trading week of 2016 Lets analyze how to trade nifty in coming week. I sincerely Hope the Weekly Chopad levels have helped in your trading in 2016 and helped you becoming a profitable trader.

As discussed in last analysis ABCD Pattern target is of 8370 Holding 8044.

Harmonic pattern got invalidated as we break 8044. For coming week break of 7900 can see fast move towards 7700.

Nifty broke the gann angles as shown in above chart suggesting bears can push nifty below 7700/7650 once 7900 is taken out. Nifty As per time analysis 26 Dec  is Gann Turn date , expect an impulsive around this dates. It was negative week, with the Nifty down by 153 points  closing @7986 closing below 8000, also breaking the lower channel of AF and closing below it suggesting bears are having upperhand as we end 2017. Last Year Open was at 7938 Bulls will try to close around this level so that We get a perfect DOJI candle on Yearly charts and 2017 can see a move of 10-20% on Yearly basis.