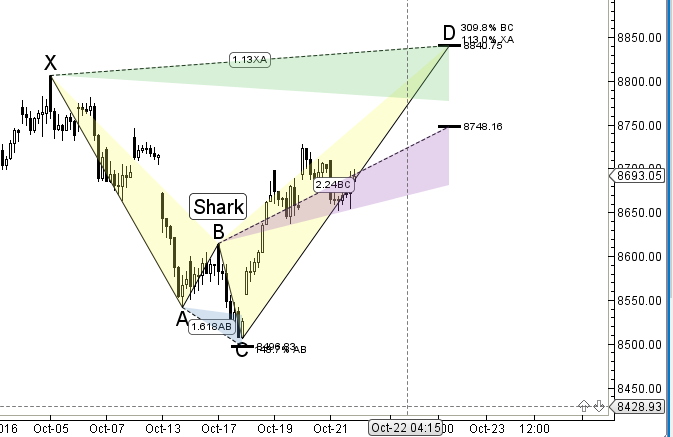 Last Week we gave Chopad Levels  of 8595, Nifty gave short entry on Monday which did 1 target on downside,Longs were triggered on 18 did 2 target on upside.  Lets analyze how to trade nifty in coming week as we are approaching a important time cycle point as per vedic time analysis. As discussed in last analysis We are forming 2 pattern ABCD and Gartley as shown in below chart which gets complete in range of 8448-8460. Low made was 8505 and nifty bounced. Nifty As per time analysis 26-28 Oct  is Gann Turn date , except a impulsive around this dates. It was positive week, with the Nifty up by 109 points  closing @8693  formed hammer candlestick pattern again closing above its weekly trendline as shown in above chart . Bulls need Weekly close 8774 for momentum to come in their favor, Unable to close above 8737 for next  week bears can push nifty towards 8577/8450 range. As per monthly chart traders should watch for 8450 level in any correction holding 8450 is very important for the current uptrend from 6825.