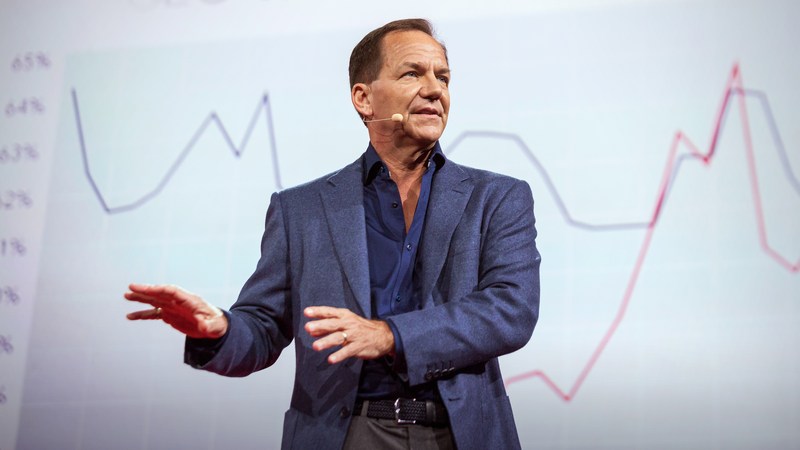 “The most important rule of trading is to play great defense, not great offense. Every day I assume every position I have is wrong. I know where my stop risk points are going to be. … If they are going against me, then I have a game plan for getting out.

“Don’t be a hero. Don’t have an ego. Always question yourself and your ability. …

“My guiding philosophy is playing great defense. If you make a good trade, don’t think it is because you have some uncanny foresight. Always maintain your sense of confidence, but keep it in check.” [Source]

Paul Tudor Jones II is one of the wealthiest men in the world. Forbes says he’s worth $4.6 billion. He started out as a broker in the late 1970s and earned $1 million in his second year on the job. He decided he wanted to be a self-reliant trader instead.

After paying his dues with some tough losses, he refused to quit on his dream and was soon making millions as a trader. He started his own hedge fund and has since made billions.

Jones is unequivocally recognized as one of the greatest traders ever. He’s also one of the nation’s most influential philanthropists as the founder of the Robin Hood Foundation.

When people think of billionaire hedge fund managers, they tend to think of big egos and aggressive risks. Jones, perhaps the most successful hedge fund manager there is, tells us the key to success is the exact opposite of that perception. He says having an ego is a recipe for disaster and that aggressive offense is the downfall of most traders. Instead, the number one goal should be to play great defense.

Whatever dream you’re chasing, it’s easy to get excited and focus all your attention on the potential rewards, but you don’t want to be blinded by your excitement. You must also make sure you’re limiting the potential risk. That’s what it means to play great defense.

To be successful, you have to take risks. There’s no question about that. But contrary to what some people think, you don’t have to take extreme risks. The fact is, risks can be considerably limited for most opportunities with a few smart precautions.

When you see a new opportunity, ask yourself these three questions before jumping in:

1) What is the best thing that can happen if I go after this opportunity?

2) What is the worst thing that can happen?

3) What are some ways I can minimize the worst case scenario?

By asking these three simple questions, your mind will quickly find some practical ways to minimize your risks. And if the downside risks are limited, the upside potential is even more intriguing.

This is how millionaires stack the odds in their favor.

For traders, that means always setting a predetermined stop for exiting a trade if it goes against you.

Contrary to some people’s opinions, millionaires aren’t wild gamblers who happen to get lucky once in a while with their crazy ideas. Instead, millionaires become millionaires by coming up with simple ways to minimize the risks and maximize the potential rewards.

We all get excited about new ideas and opportunities, but you can’t blindly throw yourself into harm’s way without any backup plans or protection against losses. Yes, there will always be risks involved with anything worth doing. But those risks can be cut back considerably if you simply take a step back and think about ways you can play great defense first.

Failure is part of life and the path to becoming a millionaire will include many failures. They key is to ensure that you will never let one single failure be so great that it wipes you out and prevents you from continuing to move forward.

3 thoughts on “A Billionaire Trader’s Surprising Secret to Success”