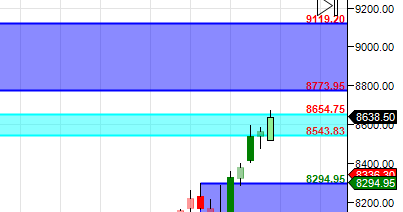 Last Week we gave Chopad Levels  of 8677, Nifty gave Long entry on Monday did the 1 target of 8710, High made was 8711 near our chopad levels and short triggered on Monday rewarded chopad followers handsomely as Nifty made low of 8518 near our final target of 8500 before giving an impulsive rally as explained in daily analysis using gann and harmonics . Last Week Chopad Level of 8677 was major resistance for bulls as Nifty failed to close above it most of the day and only on Friday closing hours was able to close above it. Lets analyze how to trade nifty in coming week. As discussed in last Analysis Hourly Chart resistance at 8649 and support at 8500. Nifty found multiple resistance at 225 degree as shown above. Once the resistance was taken out we saw impulsive move. Now we are heading towards 8760-8790 zone where next level resistance zone.

Self Explanatory Gann Angle chart,Resisting near gann angles before the next move.

2×1 line will act as an important support for bulls going forward, and nifty can see rise till 8900. As discussed in last Analysis  Now Bulls need a weekly close above 8654 for 8773.

Nifty As per time analysis 09/12 Aug  is Gann Turn date , except a impulsive around this dates.