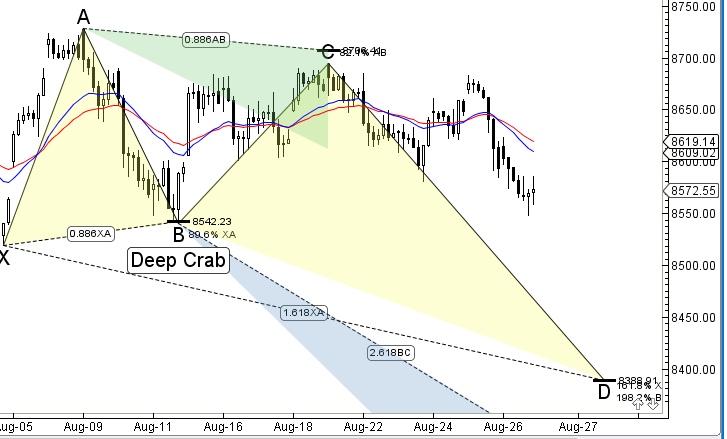 Last Week we gave Chopad Levels  of 8700, Nifty did not close above the chopad level during single session made high of 8685 and 8683 but sold off immediately , and gave chopad follower multiple entry on Monday and Thursday which did 1 and 2 target on downside respectively . Last Week Chopad Level of 8676 was major resistance for bulls as Nifty failed to close above it. Lets analyze how to trade nifty in coming  week as we approach Monthly closing.

Nifty traded in the blue channel as shown above, touching both upper and lower end of channel  suggesting breakout or breakdown should come in next week. Break of 8470 can see move towards 8300/8225. Break of 8700 required for move towards 8800/8851.

Nifty is forming 2 harmonic pattern, One giving target of 8915 for this we weekly close above 8577 is required. Another one is SHARK pattern for this bears need to close below 8700 for target of 8542/8521.

Shark pattern did its target as low made was 8547 as bears made sure Nifty do not break 8700 in last week. As we closed below 8577 Alternate ABCD pattern gets negated. For coming as we are forming a Deep Crab pattern which will only get negate once we close above 8700, else high probability we can see move till 8434/8388.

Bears were finally were able to break 2×1 line and saw a weekly close below it. Suggesting Bears can push nifty till 8434/8388.

Bulls will get active only above 8700. As discussed in Last Analysis  Bulls need to hold 8596 on Weekly Basis we can see move till 8849.

Nifty As per time analysis 29/30 Aug  is Gann Turn date , except a impulsive around this dates. It was negative week, with the Nifty down by 94 points  closing @8572.Nifty has been trading in the weekly channel as shown above, Bulls again managed to close above the weekly channel suggesting they are still in play and can play next move towards 8900 as per weekly channel. As per Gann Time Analysis we are approaching 77 Week from top of 9119, expect impulsive move in coming week or at most next week. 5 Months of Higher close, Bulls should hold 8577 on MOnthly basis for next target of 8951