As of Now If FII invest in Indian companies and if you sell them in profit before 1 year , You need to pay capital gain tax to Indian Goverment as all Indian do.

Now it all changes after the amendment treaty signed yesterday between India and Mauritius.

Below are the Salient Feature

Source-based taxation of capital gains on shares: With this Protocol, India gets taxation rights on capital gains arising from alienation of shares acquired on or after 1st April, 2017 in a company resident in India with effect from financial year 2017-18, while simultaneously protection to investments in shares acquired before 1st April, 2017 has also been provided. Further, in respect of such capital gains arising during the transition period from 1st April, 2017 to 31st March, 2019, the tax rate will be limited to 50% of the domestic tax rate of India, subject to the fulfillment of the conditions in the Limitation of Benefits Article. Taxation in India at full domestic tax rate will take place from financial year 2019-20 onwards.

Limitation of Benefits (LOB): The benefit of 50% reduction in tax rate during the transition period from 1st April, 2017 to 31st March, 2019 shall be subject to LOB Article, whereby a resident of Mauritius (including a shell / conduit company) will not be entitled to benefits of 50% reduction in tax rate, if it fails the main purpose test and bonafide business test. A resident is deemed to be a shell/ conduit company, if its total expenditure on operations in Mauritius is less than Rs. 2,700,000 (Mauritian Rupees 1,500,000) in the immediately preceding 12 months.

Source-based taxation of interest income of banks: Interest arising in India to Mauritian resident banks will be subject to withholding tax in India at the rate of 7.5% in respect of debt claims or loans made after 31st March, 2017. However, interest income of Mauritian resident banks in respect of debt-claims existing on or before 31st March, 2017 shall be exempt from tax in India.

It will improve transparency in tax matters and will help curb tax evasion and tax avoidance. At the same time, existing investments, i.e. investments made before 1.4.2017 have been grand-fathered and will not be subject to capital gains taxation in India. 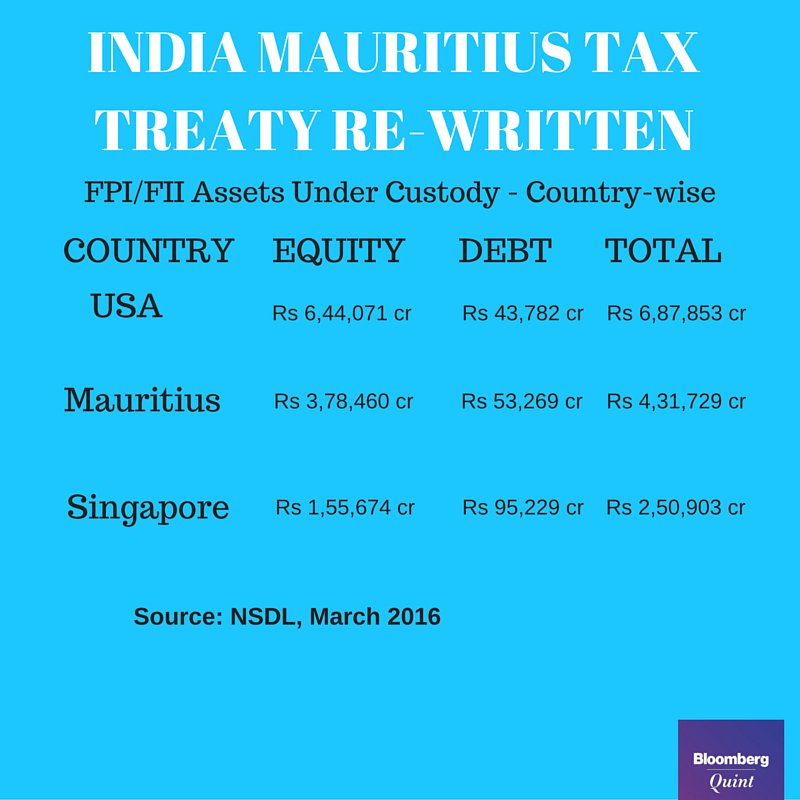 Stock Markets will see fall in flows on Hot money and Short term money come via Marutius as shown above will have to pay Short term tax at 15%. SO algo funds, short term funds might show some selling.

Last Time we had the same issue in 2007 Nifty hit a Lower circuit in 5 sec but recovery was equally swift, So todays dip might provide an opportunity to buy.