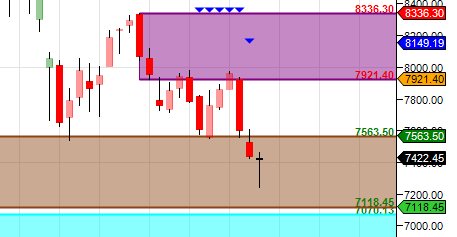 Last Week we gave Chopad Levels  of 7376 , Nifty gave short entery on Monday which got stopped out on Tuesday, and Traders were able to Intitate long which moved till 1 Tgt of 7457 High made was 7462. Shorts were again triggered on Wednesday Open and Did 2 target on downside @7450, Low made was 7241. So Both High and Low was made near our Chopad levels. Lets analyses how to trade nifty next week as we have Trading Holiday on Tuesday on Account of Republic Day.

Nifty moved perfectly in pyrapoint angles break support at 360 line, and saw a quick fall till 405 and bounced back again to stop at 360. Now Nifty is forming an ABCD pattern which gets completed around 7221 as shown in above chart.

As discussed in last week Gann angles are shown above as shown we can see move till blue line. Self explanatory chart of Weekly Supply and Demand zone is shown,Weekly close below 7563 can see moving towards 7118 levels.We have seen low of 7221,But now bulls needs to see close 7563 to be out of bear clutches.

Nifty As per time analysis  25/29 Jan  is Gann Turn date , except a impulsive around this dates. Last week we gave 18/20 Jan Nifty saw a volatile move. It was negative week, with the Nifty down  by 15 points  closing @7422 forming DOJI candlestick unable to cross above the middle trendline as shown in above chart and closing below its 20/ 55/100 WEMA.