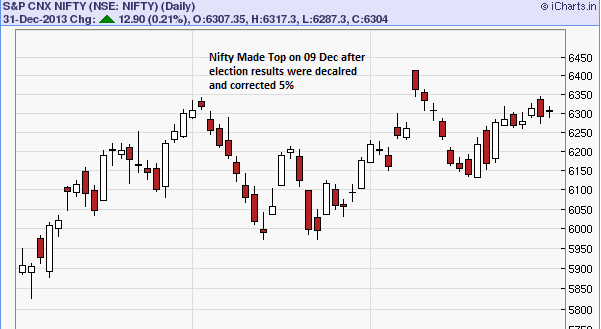 The  Bihar Election Results outcome on are important from both political and Stock Market perceptive.

No doubt it will be an acid test for our beloved PM Shri Narendra Modiji as Crucial reforms, which can aid economic growth, are still missing due to lack of NDA strength in Rajya Sabha will get a Major Push  GST, land reform bill etc. So lets analyze results from both technical and political prospective .

How Market reacts to Election Results.

While there is lot of  media attention given to Bihar Election results but as we all know Stock Market is an animal which cannot be tamed and predicted but as traders we trade on probabilities.

BJP won 3 state election with absolute majority Chhattisgarh,Madhya Pradesh and Rajasthan. Delhi BJP was the largest party, From Layman eyes this was very positive results and Stock Market should have rallied but the result was Nifty made top @6415 on 09 Dec and kept falling till 6130 a fall of 5% as shown in below chart. 2. The Result of Delhi Election which was declared on 10 Feb 2015 where BJP lost election,From Layman eyes this was very negative results and Stock Market should have corrected but the result was Nifty made bottom @8471 on 10 Feb 2015 and kept rallying till 8913  a rise of 5% as shown in below chart. So no point in going by election results and what media and Blue channels experts will discuss and advise what more important is to understand price action on Monday 09 November  to understand next “big move” which can come as we have seen market generally rally or correct for 3-5%.

How important is Bihar election for reforms?

Bihar being a mineral rich state, so If BJP wins state election a common party ruling at the centre and state would help to facilitate coordination. A lot of money (Rs 165,000 crore) has already been allocated for various infra projects including roads by the government earlier and for successful fruition, the same government phenomenon would be effective.

Bihar today comes in the lowest grade of the ease of doing business in states report released sometime back in the ‘jumpstart needed category’ with a score of 16.4% compared with 71.1% for Gujarat thus ranking 21 out of 32 states and UTs.

A victory for the NDA would also help the government in retaining fiscal prudence . It may be recollected that the government for some reason had created an impression that it would be less inclined towards freebies and subsidies and hence was seen as being against social spending.

A loss in Bihar and its ramifications for the NDA would perforce compel higher spending on such programmes which can pressurise the deficit.We have Important state election coming in Tamil Nadu, West Bengal and Keral where NDA has no presence so NDA might need to dole out subsidies so as not to be seen as Anti People.

If BJP fails to win the election, the reform process will not take a back seat as a win in the elections can at best change the number of seats in the Rajya Sabha by two.