Submitted by Jesse via The Burning Platform blog,

This is one of the best documentaries on the Crash of 1929 if you wish to get a feel for the times.   You may find it interesting to watch the whole thing below.I have posted the entire documentary twice before:  once, on the 80th anniversary of Black Thursday in 2009, and once before in December of 2007.

I remember the Summer of 1929 being described as unusually hot, with the stock market going up and down like a roller coaster, making investors and pundits almost dizzy.  That is, until the great push up to the very height of the market in early September.

It was the laissez-faire abuses of the 1920’s, the reign of supply side economics,  the institutionalized political corruption of easy money, an oversized,  overly influential and powerful financial/industrial sector that set the stage for the terrible Depression of the 1930’s.

It also gave rise to the many reforms introduced by the FDR administration.

Most of which have been steadily overturned, one by one, by the big money interests who care for nothing but themselves, and would do it again, and again, if allowed to do so.

Most of the scams of the moneyed interests are remarkably simple, and the same over time.  At least they are once you scrape away the jargon, the bells and whistles, and paid for policy theories of pedigreed prostitutes.

The titans of Wall Street are no smarter than many smart people who do much more difficult jobs and lead simple, honest lives. But they are driven, they are insatiable, and they are shameless.

Enough people are easily fooled in each generation by well scripted ideological PR campaigns, clever revisions and misrepresentations of history, and the steady drumbeat of slogans and propaganda to allow the same old scams and abuses to come back again.  And unfortunately even very smart and powerful and greatly advantaged people are always willing to do anything for money.

Here is a link to the transcript of this documentary.

Narrator: At sea and on land, everyone seemed to be making money. It was a stampede of buying. And major speculators like John Jacob Rascob whipped up the frenzy. He told readers of The Ladies’ Home Journal that now everyone could be rich. September 2nd, Labor Day. It was the hottest day of the year. The markets were closed and people were at the beach. A reporter checked in with astrologer Evangeline to ask about the future of stock prices. Her answer: the Dow Jones could climb to heaven. The very next day, September 3rd, the stock market hit its all-time high.

Narrator: On September 5th, economist Roger Babson gave a speech to a group of businessmen. “Sooner or later, a crash is coming and it may be terrific.” He’d been saying the same thing for two years, but now, for some reason, investors were listening. The market took a severe dip. They called it the “Babson Break.” The next day, prices stabilized, but several days later, they began to drift lower. Though investors had no way of knowing it, the collapse had already begun

Narrator: In the weeks to follow, the market fluctuated wildly up and down. On September 12th, prices dropped ten percent. They dipped sharply again in the 20s. Stock markets around the world were falling, too. Then, on September 25th, the market suddenly rallied.

Reuben L. Cain, Former Stock Salesman: I remember well that I thought, “Why is this doing this?” And then I thought, “Well, I’m new here and these people” — like every day in the paper, Charlie Mitchell would have something to say, the J.P. Morgan people would have something to say about how good things were — and I thought, “Well, they know a lot more about this market than I do. I’m fairly new here and I really can’t see why it’s going up.” But then, when they say it can’t go down or if it does go down today, it’ll go back tomorrow, you think, “Well, they really are like God. They know it all and it must be the way it’s going because they say so.”

Narrator: As the market floundered, financial leaders were as optimistic as ever, more so. Just five days before the crash, Thomas Lamont, acting head of the highly conservative Morgan Bank, wrote a letter to President Hoover. “The future appears brilliant. Our securities are the most desirable in the world.” Charles Mitchell assured nervous investors that things had never been better.

Craig Mitchell, Son of Charles E. Mitchell: Practically every business leader in America, and banker, right around the time of 1929, was saying how wonderful things were and the economy had only one way to go and that was up.

“Running for President under the slogan “Rugged Individualism” made it difficult for Hoover to promote massive government intervention in the economy. In 1930, succumbing to pressure from American industrialists, Hoover signed the Hawley-Smoot Tariff which was designed to protect American industry from overseas competition. Passed against the advice of nearly every prominent economist of the time, it was the largest Tariff in American history. (at that time the US was a large export economy with a trade surplus).

Believing in a balanced budget, Hoover’s 1931 economic plan cut federal spending and increased taxes, both of which inhibited individual efforts to spur the economy.

Finally in 1932 Hoover signed legislation creating the Reconstruction Finance Corporation. This act allocated a half billion dollars for loans to banks, corporations, and state governments. Public works projects such as the Golden Gate Bridge and the Los Angeles Aqueduct were built as a result of this plan.

Hoover and the RFC stopped short of meeting one demand of the American masses — federal aid to individuals. Hoover believed that government aid would stifle initiative and create dependency where individual effort was needed. Past governments never resorted to such schemes and the economy managed to rebound. Clearly Hoover and his advisors failed to grasp the scope of the Great Depression.” 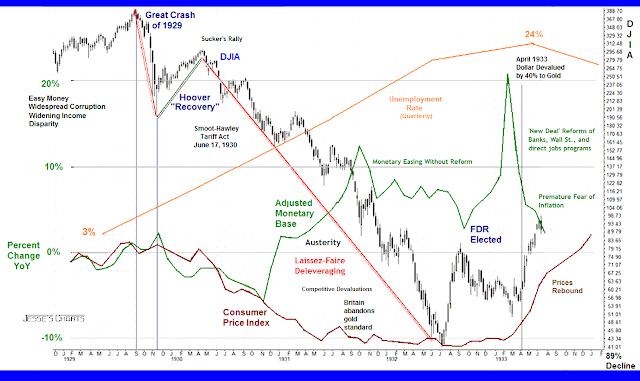