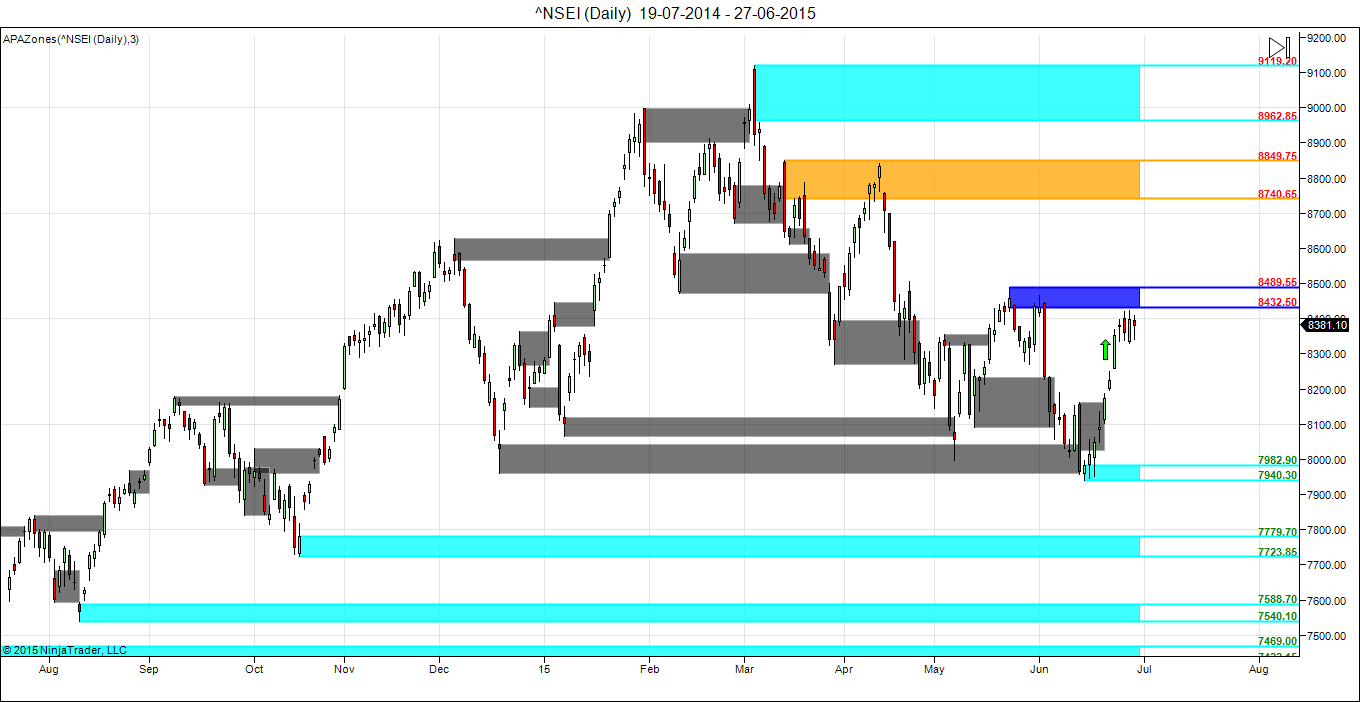 Last week we gave Chopad Levels  of 8251 ,Nifty made high of 8423 almost  meeting our 3 Chopad Level of 8446  Lets analyze how to trade market in coming week as we also have monthly closing and Greece drama has comes to climax with Alex Tripas asking for referendum which can send shock waves to world financial market.

Now as per Currently Hourly chart was unable to cross the 3×1 gann angle, support lies @4×1 gann line breaking the same can lead to fall near 8200 odd levels. Breakout will come only on hourly close above 8500.

Hourly charts on Elliot wave shows we are done with rise can see pullback near 8200 and below that can see fall below 8000 odd levels in medium term.

As per Pyrapoint Analysis till 8350 is held @45 degree line bulls are in control,below that 8200 on cards. As disucssed last week 8432 is supply zone, nifty made high of 8423 and started showing pullback. Unable to corss the green arc suggests we can see pullback till 8200/8250 odd levels. Nifty As per time analysis 29 June/02 July  is Gann Turn date , except a impulsive around this dates. Last week we gave  22 June/25 June Nifty saw a volatile move .

It was positive week, with the Nifty up by 156  points  closing @8381 , and closing above its 55 WEMA and below its 20 WSMA. Nifty has bounced sharply 483 points in past 12 trading sessions based on oversold nature of Weekly chart and positive divergence, Now has been consolidating in range of 8329-842, break of any of the 2 levels can show a move of 100 points. As per time analysis next cycle from  29-03 July will be Volatile cycle with underlying trend neutral to bearish.  Time Analysis of showing positive move after 14 June worked perfectly Gunner weekly charts bounced perfectly from red arc and horizontal line and resistance @grey line as shown in above chart.

Monthly chart recovered back to its 23.6 % retracement. Nifty i s again in danger zone of PE charts also forming a traingle pattern, can come to down to rising trendline suggesting correction on cards,if pattern has to work.