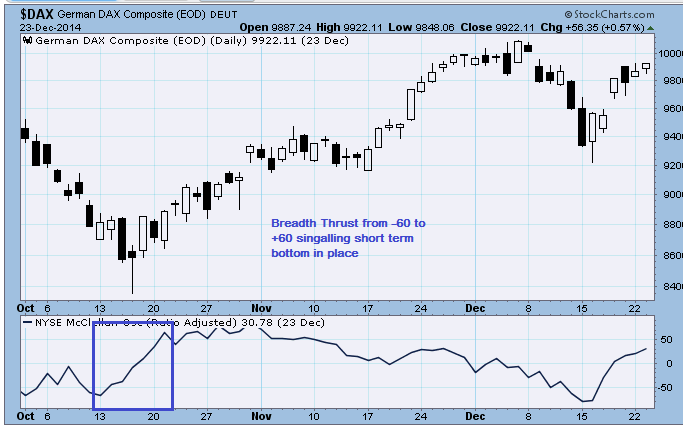 The McClellan Oscillator was developed by Sherman and Marian McClellan. Extensive coverage of the oscillator is provided in their book Patterns for Profit

issues. It is plotted against the movements of a particular exchange.

Let’s look at a chart of the SPX with the McClellan Oscillator below it. McClellan Oscillator can be used in trading using the below

Let discuss all 3 in details

The McClellan Oscillator generates the Buy and Sell Signal as follows

Extreme overbought/sold conditions (outside -100 and +100)

sign of an extremely overbought or oversold condition. These extreme readings are usually a sign of a continuation of the current trend. As seen in below chart S&P 500 went in oversold zone and turn up signalling a Buy which should be sold once the McClellan Oscillator turns back in overbought zone.

As seen in below chart S&P 500 went in overbought zone and turn down signalling a Sell which should be bought once the McClellan Oscillator turns back in oversold zone. The chart below shows the DAX with McClellan Oscillator during the October 2014 bottom. Notice how the McClellan Oscillator surged more than 150 points (-50 to +50). This surge reflected strong buying pressure that marked an important low. Think of it as a rocket on lift off. A strong surge is needed to solidify a low and escape the gravity of selling pressure. Also notice that the DAX continued higher till December 2014. Bullish (Positive) and Bearish (Negative) Divergence in the McClellan Oscillator can foreshadow reversals in the underlying index.

Do note There will be many divergences and most will not result in reversals or extended moves. The McClellan Oscillator measures the momentum of the AD Line or Net Advances. As a momentum oscillator, it is prone to the pitfalls of normal momentum oscillators, such as MACD. Bearish and bullish divergences can produce some great signals, but these signals are certainly not fail-proof. The same is true for breadth thrusts and crosses into negative or positive territory. Like MACD, the McClellan Oscillator is a rather volatile indicator that produces many potential signals. Signals should be confirmed or refuted with other technical indicators and chart analysis. Chartists can also study past behaviour to get a better handle on future behaviour.