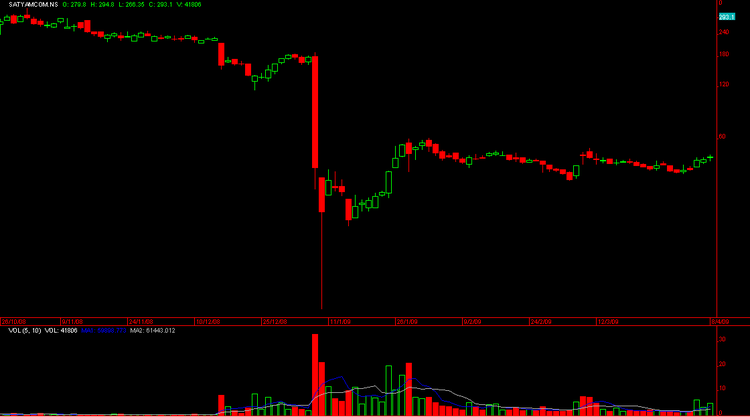 Brief of Satyam Computer
On 24th June 1987, Satyam Computer was incorporated as private limited company for providing software development and consultancy services to large corporation. The company was promoted by B Rama Raju and B Ramalinga Raju.
In 1991, Satyam Computers became the first Indian company to provide offshore services. His first major client John Deere, was skeptical about outsourcing to Satyam, but Raju`s simple extensive management module convinced it.
What started as humble beginning in 1990`s by the end of the decade catapulted the Satyam Computer into the big league of IT companies in India. Satyam became the fourth largest IT Company.
‘Humpty Dumpty had a great fall’, Satyam computer image got severe hit that  can never be mended when its promoter accepted in writing to SEBI about the fudging of books of account of the company for showing inflated profit. Investor lost all out faith in the working of the company and dumped the share of the company. Satyam share price had a free fall on 07 Jan 2009 and it closed about 80% down from the previous day close price at Rs40. Chart shown below As can be seen from the chart the stock of Satyam Computers fell from Rs.180 to Rs.5 in 2 trading sessions.

EVENTS LEADING TO THE FALL:

The Global corporate community was shocked and scandalised when the chairman of Satyam, Ramalinga Raju resigned on 7 January 2009 and confessed that he had manipulated the accounts by US$1.47-Billion.

The fudging of books of account by the promoters of Satyam is one biggest fraud that Indian corporate world has witnessed. Raju admitted the falsifying of the earning and asset in his letter to the SEBI chairman. He admitted of the following:

How did such a big fraud escape detection?

Didn’t someone in the management notice that a good chunk of the company’s clients, projects and bank balances were actually  missing? SEBI’s investigations show that many of them did. But they either helpfully supported the cover-up or turned a blind eye, deferring to ‘instructions from the Chairman’s office’.

Asked how he could have had no clue about something as basic as Satyam’s bank balances, the company’s ex-CFO, Vadlamani Srinivas, claimed that it was the company’s chairman and managing director who made decisions on investing all surplus cash. They also chose to safe-keep all the bank statements in their office, making them available only when the accounts were prepared.

But didn’t the CFO notice the yawning gap between the bank balances in the accounting system and the ones provided by the chairman’s office? He was too busy with ‘investor relations work’ to look into accounting issues, was his reply. Now we know what CFOs of large corporations do!

9 thoughts on “Satyam India’s Enron : How the Scandal Unfolded”