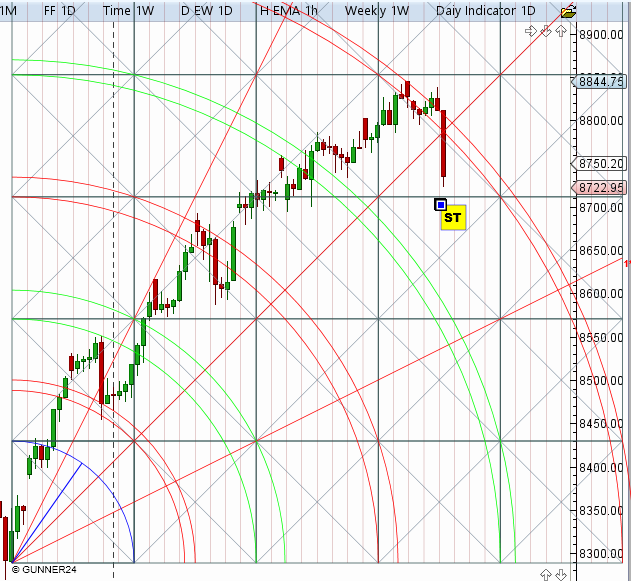 Last week we gave Chopad Levels  of 8806 , Nifty did 3 target on downside  and got stopped out on upside.  Lets analyze how to trade market in coming week. Nifty Hourly charts has broken on downside and below  its 21/34 EMA, till 8682/8690 is not broken trend remains on downside. As per Pyrapoint Analysis unable to sustain above its 135  degree line, suggesting move towards its 180 degree line which lies near 8525. Nifty as per Market profile 8596 should be closely watched in coming week, Holding the same rally continues till 8682/8750 . Breaking the same can see pullback till 8497 Nifty fractal which are swing high an swing top are shown in above chart.Also we have included indicator which defines bulls and bear trend, As of now trend is down  till 8665 is not broken. ON Daily chart Nifty Gunner bouned from red arc and took resistance at green arc. Close below 8596 can make move towards 8489/8400. If butterfly pattern needs to form Nifty should bounce sharply in coming week till 8800. Self Explanatory chart for Supply and Demand zone.

Nifty As per time analysis 20 April/23 April  is Gann Turn date , except a impulsive around this dates. Last week we gave 13 April/15 April Day  and Nifty saw a volatile move on both the days . As per PE ratio has again up to 23.06, Result season is going to start unable to upgrade the earning can see nifty moving in bubble category.