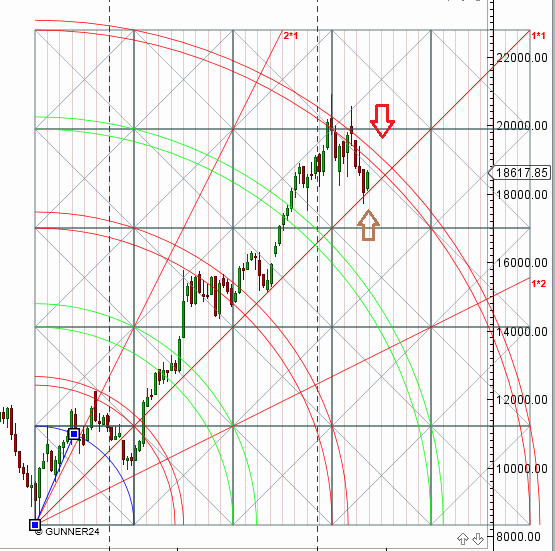 Last week we gave the Chopad level of 18036 Bank Nifty achieved 3 target on upside made low of 18809 and Chopad level was 18036.Lets analyze how to trade next week as we have RBI policy on Tuesday.

Bank Nifty on hourly charts  entered in  Demand zones and reacted sharply on upside.Now resistance zone marked in above chart will become support.

This is what we wrote last week As per Pyrapoint Box Bank Nifty held its 180  degree of pyrapoint holding the same counter trend rally 18500  is expected.

Entered back in  channel but Unable to cross 100 DMA. Almost done with one round of rise can see pullback if 18700 is not crossed. On Daily chart near important Gunner support , which showed bounceback and now is entering a new quadrant in coming week.

Nifty As per time analysis 06 April/08 April  is Gann Turn date , except a impulsive around this dates. Last week we gave 30 March/01 April Day  and Nifty saw a volatile move on both the days .01 April saw a big rally.

Close above  its 50 % retracement as per FF.

It was positive week, with the Bank Nifty up by 573 points  closing @18617  , entering the support line of Andrew Pitchfork  and closing below its 20 WSMA @18758  which has given support in past 3 times.Entering a new quadrant next week.