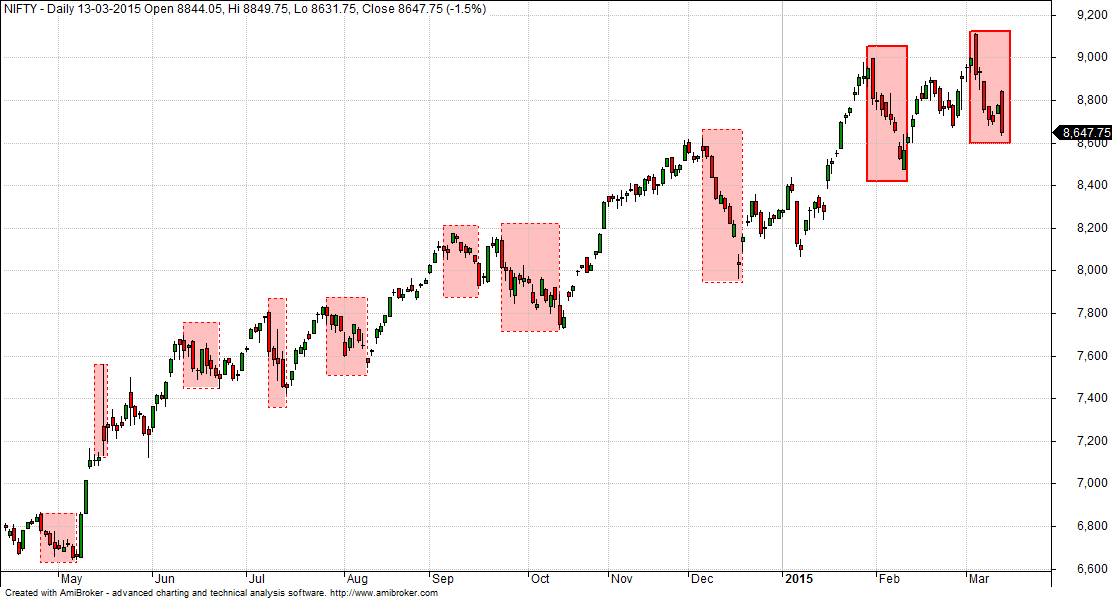 Last week we gave Chopad Levels  of 8936  Nifty opened at 8891 below chopad levels and  did 2 target on downside rewarding Chopad followers with 170 points. Last week is the biggest weekly loss for CY2015 . Lets analyze how to trade next week.

Nifty Hourly charts has broken its trendline support and trading well below 21/34 EMA,If we draw 16×1 gann line as shown in above chart support comes in range of 8542-8555 Nifty.

Elliot wave chart  on Hourly is shown above suggesting 8601 will play a crucial role in coming week. Nifty has closed below its 50 SMA, and broken its trendline so next week we need to see follow up move. Can the fall get extended till 100 SMA which has given support 3 times in past. As discussed last week, Nifty obliged us Nifty has completed its Butterfly pattern with move till 9119 and move till 8600 is on cards as per harmonic analysis.

As per EW more legs are left to the rally use dips around 8500/8460  to take exposure to quality large and mid caps stocks. NO leveraged positions this for cash market traders.

Nifty As per time analysis 16/20 March  is Gann Turn date , except a impulsive around this dates. Last week we gave 10/12 Mar Day  and Nifty saw a volatile move on both the days .

Nifty broke its Fibo fan support so next week we need to see do we get the follow up move. It was negative week, with the Nifty down  by 290  points  closing @8747 forming a Evening Start candlestick pattern, and breaking its trendline support and heading towards its 20 WSMA @8544 which has given support in past 3 times as seen in above chart.Also we are entering a new time cycle from 09March-27 March which will be highly volatile so trade cautiously.

Thanks to Ganesh K for helping me on PE chart