The S&P 500 closed lower by 1.64% on the day to 2026.14.  Those who write headlines are blaming the fall on falling energy prices but there is another possibility for why we fell.

After the double top (marked in blue above) in the S&P broke 2050, a pattern target of 2021 was triggered.  Today’s low of 2024.26 was only three points above this level.  Therefore, some additional downside to meet this target is possible.  However, the pattern target is also a confluence zone with the 23.6% retracement level and a bullish backtest of the September highs.  This is the level technicians will want to see the market hold.

Bullish divergences have yet to show up on the daily charts but are showing themselves on the 30 and 60 minute charts.  While this is no guarantee of a bottom, this taking place near technical support levels is a healthy occurrence.

In addition, there are quantitative reasons to become bullish at these levels.  When the S&P 500 has closed down greater than 1.50% during a session in December, there has been a tendency to reverse and trade higher.  Five sessions later has shown a strong 1.40% return on average with a 72.62% win rate.  Two weeks later this has risen to 1.92% with a 71.43% win rate.  Three weeks and one month later have averaged returns of 2.36% and 2.98% respectively.

Furthermore, the S&P closed down 2.00% month to date.  Investors who have gone long the close of the first session in December to close lower by 2.00% or more month to date since 1970 have been rewarded. 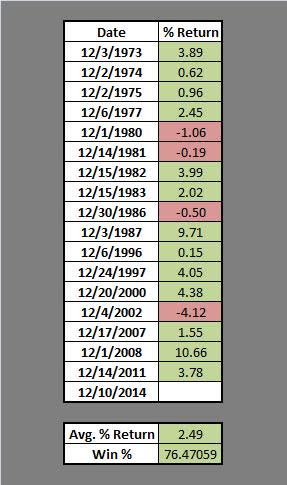 Average returns through the end of the month have been 2.49% with a 76.47% win rate.  Average winners have also been 2.53 times larger than average losing years.  Moreover, seven of the past eight times this took place the market closed higher at the end of the month by 3.77% on average.

Seasonally, a couple more sessions of weakness remain.  There is no way to tell what will take place over the following one to two sessions but do not discount the fact that the Santa Rally is still yet to come.  Odds point to us seeing higher prices into the end of the month.

Disclosure: The author is long the ES_F contract at the time of writing this.