Issue 1. If the price of oil is too low, it will simply be left in the ground.

The world badly needs oil for many purposes: to power its cars, to plant it fields, to operate its oil-powered irrigation pumps, and to act as a raw material for making many kinds of products, including medicines and fabrics.

If the price of oil is too low, it will be left in the ground. With low oil prices, production may drop off rapidly. High price encourages more production and more substitutes; low price leads to a whole series of secondary effects (debt defaults resulting from deflation, job loss, collapse of oil exporters, loss of letters of credit needed for exports, bank failures) that indirectly lead to a much quicker decline in oil production.

The view is sometimes expressed that once 50% of oil is extracted, the amount of oil we can extract will gradually begin to decline, for geological reasons. This view is only true if high prices prevail, as we hit limits. If our problem is low oil prices because of debt problems or other issues, then the decline is likely to be far more rapid. With low oil prices, even what we consider to be proved oil reserves today may be left in the ground.

Issue 2. The drop in oil prices is already having an impact on shale extraction and offshore drilling.

While many claims have been made that US shale drilling can be profitable at low prices, actions speak louder than words. (The problem may be a cash flow problem rather than profitability, but either problem cuts off drilling.) Reuters indicates that new oil and gas well permits tumbled by 40% in November.

Offshore drilling is also being affected. Transocean, the owner of the biggest fleet of deep water drilling rigs, recently took a $2.76 billion charge, among a “drilling rig glut.”

3. Shale operations have a huge impact on US employment.

Zero Hedge posted the following chart of employment growth, in states with and without current drilling from shale formations:

Clearly, the shale states are doing much better, job-wise. According to the article, since December 2007, shale states have added 1.36 million jobs, while non-shale states have lost 424,000 jobs. The growth in jobs includes all types of employment, including jobs only indirectly related to oil and gas production, such as jobs involved with the construction of a new supermarket to serve the growing population.

It might be noted that even the “Non-Shale” states have benefited to some extent from shale drilling. Some support jobs related to shale extraction, such as extraction of sand used in fracking, college courses to educate new engineers, and manufacturing of parts for drilling equipment, are in states other than those with shale formations. Also, all states benefit from the lower oil imports required.

Issue 4. Low oil prices tend to cause debt defaults that have wide ranging consequences. If defaults become widespread, they could affect bank deposits and international trade.

With low oil prices, it becomes much more difficult for shale drillers to pay back the loans they have taken out. Cash flow is much lower, and interest rates on new loans are likely much higher. The huge amount of debt that shale drillers have taken on suddenly becomes at-risk. Energy debt currently accounts for 16% of the US junk bond market, so the amount at risk is substantial.

Dropping oil prices affect international debt as well. The value of Venezuelan bonds recently fell to 51 cents on the dollar, because of the high default risk with low oil prices.  Russia’s Rosneft is also reported to be having difficulty with its loans.

There are many ways banks might be adversely affected by defaults, including

After the many bank bailouts in 2008, there has been discussion of changing the system so that there is no longer a need to bail out “too big to fail” banks. One proposal that has been discussed is to force bank depositors and pension funds to cover part of the losses, using Cyprus-style bail-ins. According to some reports, such an approach has been approved by the G20 at a meeting the weekend of November 16, 2014. If this is true, our bank accounts and pension plans could already be at risk.1

Issue 5. Low oil prices can lead to collapses of oil exporters, and loss of virtually all of the oil they export.

The collapse of the Former Soviet Union in 1991 seems to be related to a drop in oil prices. 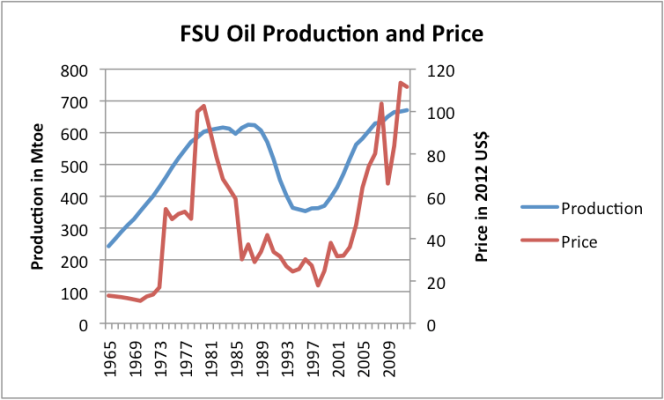 Oil prices dropped dramatically in the 1980s after the issues that gave rise to the earlier spike were mitigated. The Soviet Union was dependent on oil for its export revenue. With low oil prices, its ability to invest in new production was impaired, and its export revenue dried up. The Soviet Union collapsed for a number of reasons, some of them financial, in late 1991, after several years of low oil prices had had a chance to affect its economy.

Many oil-exporting countries are at risk of collapse if oil prices stay very low very long. Venezuela is a clear risk, with its big debt problem. Nigeria’s economy is reported to be “tanking.” Russia even has a possibility of collapse, although probably not in the near future.

Even apart from collapse, there is the possibility of increased unrest in the Middle East, as oil-exporting nations find it necessary to cut back on their food and oil subsidies. There is also more possibility of warfare among groups, including new groups such as ISIL. When everyone is prosperous, there is little reason to fight, but when oil-related funds dry up, fighting among neighbors increases, as does unrest among those with lower subsidies.

By Gail Tverberg via Our Finite World blog,