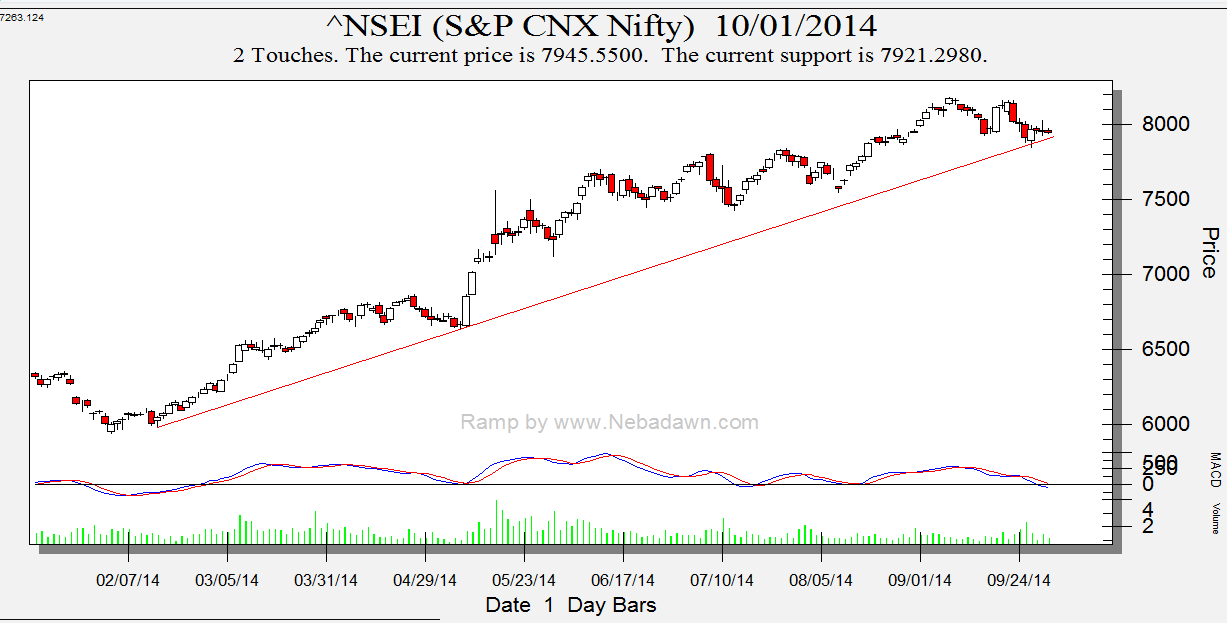 Last week we gave  Nifty Chopad level of 7990 and Nifty did a low of 7923 on downside almost achieving the 1 target is Holiday shortened week.Next week traders need to Watch For Fed Minutes which will come Wednesday night  ,Brazil Election and Bank of England decision will impact the market. Lets see how to trade market next week. Nifty trading will start on Tuesday as Monday is again a trading holiday. Hourly EW is showing correction can be seen till 7914 range and bounceback to 7986 range. As per Price Channel concept Nifty is entering in zone of demand as seen in above chart holding the same upmove can be seen towards the highs of channel. As per time analysis 07 October is Gann Turn date , except a impulsive around this date. 8041/8088 are 2 Fibo retracement levels which needs to be watched closely in coming week. It was negative week, with the Nifty down by 23 points  closing @7945. As per Harmonic Bias as seen in above chart, first time after 6000 and 31 week we are seeing trend change from Bullish to Neutral, so expect choppy/sideways move till the Harmonic Bias turn back to Bullish zone ie, Weekly candle turns back to green.Nifty took exact resistance near Andrew Pitchfork resistance line and now need to see pullback we saw has formed short term bottom before next round of upmove.Also we are approaching the 55 day cycle on Weekly charts also.Weekly time analysis suggests next cycle which is mostly to be sideways/negative might last another week. Bulls saved 7950 on Monthly levels, also forming a spinning top pattern, Now as seen in above chart this month we can see a good upmove going by Historical pattern of this bull run.