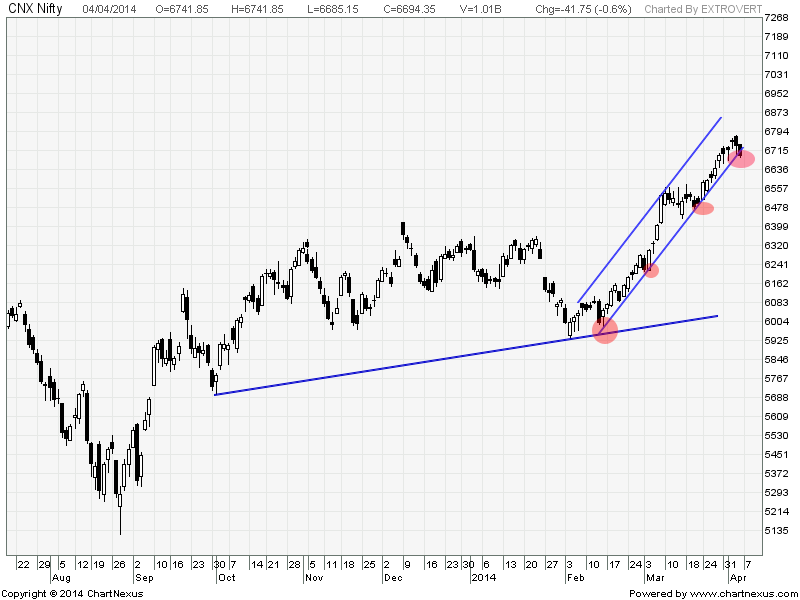 Next week seems to be full of events which will be led by first phase of Lok sabha elections which begins on Monday , followed by IIP and inflation data and beginning of the results season with Infosys declaring its results on Friday. Recent Opinion Polls have predicted NDA coming to power, and stable government which has prompted FII’s have put 3 Billion Dollar in India. Opinion Polls have gone wrong in 2004 and 2008 so blindly believing them and investing will be a grave mistake. Take the classic example of IDFC last week which after getting Bank License went high of 140 and corrected back to 125, So lesson traders and investor should learn market already factor is events 6 months well in advance and surprise most of market participants with its move. So analyze and trade price only and forget the news. So forget about Nifty hitting 7500 or 6000 but make sure you are part of the move and having trading system will only help you. Nifty Hourly charts has closed below its 50 HDMA, which is bearish in short term.Any close above 6765 will bring back bullishness in market.Breaking 6600 will only bring bears in market. On daily charts, nifty formed lower high lower low this is the first sign of the weakness which will get confirmed below 6675  for short term target of 6600-6610. Nifty after breaking out of 6510 range last week, consolidated its gains in current week. Now range of 6580-6610 becomes an important support of market. Nifty has formed multiple resistance in range of 6562-6575 range, and now these will act as support . Nifty Fibonacci fan are wonderful tool to find the top and bottom in short term.Nifty is trading at its fibo fan resistance, unable to cross 6765 in coming week we can see a pullback to 6575-6600 odd levels. As per Fibo retracement ,only a close below 80% retracement of 6600 will end the current bull run. It was neutral week, with the Nifty down by 2 points  closing @6694. Nifty is again taking resistance at its rising trendline also forming a DOJI/spinning top candlestick which are bearish in nature but need a follow up action with a break below 6600 on closing basis. Monthly chart is try to enter the penultimate arc of Fibo arc, Unable to cross the same market can see a pullback of 250-300 points in short term.