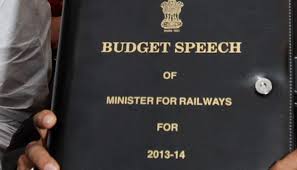 Railway Minister Mallikarjun Kharge presented the interim rail budget for the next fiscal Wednesday with no hike in fares or freight, introducing 72 new trains and connectivity to two more northeastern states.

In what was his personal first and the last such exercise in the 15th Lok Sabha for the United Progressive Alliance (UPA) government, Kharge also promised a new tariff-setting body and said work on eastern and western freight corridors was progressing well.

The minister only read a part of his speech, for all of 14 minutes in the lower house of parliament. The full speech copy, along with the other documents that included a vote on account for the first four months of the next fiscal, was laid on the table of the house.

He said despite the resource constraints, the targets for the current fiscal were fully achieved, with some 2,207 km of new lines, adding two more northeastern states will be on the country’s railroad map this fiscal — Arunachal Pradesh, Meghalaya.

Anticipating a healthier economic growth, the freight traffic target, he said, was also proposed higher at 1,101 million tonnes — an increment of 49.7 million tonnes over the current year’s revised target of about 1,052 million tonnes.

In terms of electrification of the network, 4,556 km railway line was completed this fiscal, against the target of 4,500 km, while the target of doubling the gauge was also surpassed with 2,227 km, against 2,000 km.

Train services will also start for Vaishno Devi shrine at Katra in Jammu and Kashmir. He said three new rail factories in Bihar, Uttar Pradesh and West Bengal have already been commissioned — a wheel plant at Chhapra, a coach factory in Rae Bereli and a diesel component factory at Dankuni, respectively.

“Specially designed coaches for adverse weather conditions have been inducted for rail travel in Kashmir valley. Also corrosion-resistant and lighter wagons to carry extra pay-load and higher speed of up to 100 km per hour have been developed,” he said.

As far as safety is concerned, there are no unmanned level crossings left, the minister said, even as induction-based cooking was introduced in the pantry cars to prevent fire and improved audio-video systems installed to warn road users of approaching trains.

Kharge, who has been holding the railway portfolio only for the past eight months, spoke of the role played by the railways in India’s social and economic development and the lack of physical and financial resources to carry this mandate forward.

“It’s time we take note of the investment and other urgent needs of the railways.”Ranked among the world’s top five , the Indian railroad network ferries 23 million people and 2.65 million tonnes of goods daily from 7,083 stations on 12,000 passenger and 7,000 freight trains over more than 64,000 route km.

It is also among the largest employers with an estimated 1.4 million people on rolls.