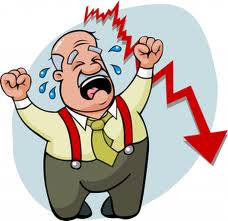 Over the last year, investors have been lulled to sleep wrapped in the warmth of complacency as the Federal Reserve stoked the fires of the market with $85 billion a month in liquidity injections. As discussed  investors were likely to be rudely awakened by an unexpected event of which was likely not even on the majority of mainstream analysts radars.  That occurred this past week as a revulsion in emerging markets sent the “carry trade” running in reverse.

“Hedge funds have been borrowing money in Japan (again) at very low Japanese interest rates, obviously denominated in yen. They then convert those yen to, say, the Brazilian real, Argentine peso, Turkish lira, etc. and buy Brazilian bonds or Turkish bonds using 10:1+ leverage. Accordingly, when such countries jacked up interest rates overnight, their bond markets collapsed. Concurrently, their currencies swooned, causing the ‘hot money’ investors to not only lose on their leveraged bond positions, but on the currency as well.  If you are leveraged when that happens, the losses add up quickly and those positions need to be sold. So the bonds were sold, and the pesos/lira/real that were freed up from those sales had to be converted back into yen (at currency losses) to pay back the Japanese loans. And as the bonds/currencies crashed, the ‘pile on’ effect exaggerated the downside dive.”

Is A Bear Market Hanging Over Our Head?

“Given the recent performance of the stock market, there is increased uncertainty among individual investors and stock market brokers about the prolongation of the actual bull market into its sixth year. Many of them are asking themselves if the declines over the past thirteen business days is the signal of the near end of the fifth longest bull market since WW II and the beginning of a new long bear market.   A very plausible answer to their interrogations is no. The stock market cycle model predicts that the current bull market will extend through March.”

According to Bank of America, aAfter a 5% loss on the S&P 500 over the last two weeks (through February 5) equity funds reported the largest weekly outflow on record. Outflows from equity funds accelerated to $27.95bn this week from a $12.02bn outflow last week, again led by ETFs.” Sure enough, what goes out (here), must come in (somewhere over there), which is why at the same time all fixed income funds reported a record $14.09bn inflow. “Mutual fund investors were clearly seeking the safety of bonds, as three quarters ($11.05bn) of the total net bond fund inflow went into government funds and another $3.48bn into high grade.” The great unrotation has officially begun, and unless the downward momentum in stocks is halted (think USD/SPY upward momentum ignition), the party may be coming to an end.

3 thoughts on “Global Market Correction Over Or Just Starting”