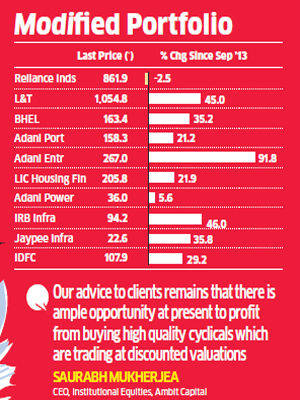 The results of elections in five states — Chhattisgarh, Delhi, Madhya Pradesh, Mizoram and Rajasthan — will be declared 8 December.Results could well influence which party comes to power in the national elections that are due by the end of May.

Many investors are hoping the state elections will show strong support for the Bharatiya Janata Party whose prime ministerial candidate Narendra Modi is considered a pro-business leader. In the Run up to election results ,infra and capital goods indices as well as select stocks have rallied sharply, partly on expectations of a BJP/NDA will win atleast 3 out of 5 states and  victory next year. Since the announcement of Modi as the BJP prime ministerial candidate, the BSE capital goods index has risen a massive 40% compared with Sensex’s rise of just 11%.

Business groups considered close to the Gujarat chief minister such as the Ahmedabad-based Adani Group, and the Mumbai based Reliance Group and a number of infra and power companies are among those believed to be benefit from what the market sees as Narendra Modi’s emphasis on job creation and infrastructure revival. Lets discuss the various possibility which might happen on Monday

So only a clear majority by BJP in at least 3 states will be positive for market rest will be neutral to negative. So Plan your trades accordingly and be hedged.