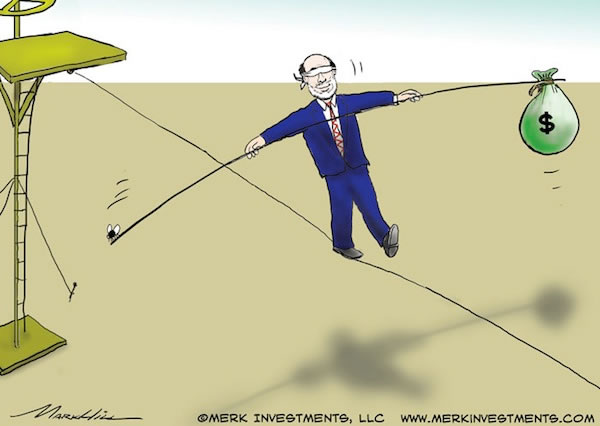 For all the hang-wringing on Wall Street about the Federal Reserve’s expected “taper,” you’d think the central bank was considering a ban on helicopter flights to the Hamptons.

Take a deep breath. For most of the rest of us, the Fed’s “tapering” of its massive money flows into the U.S. economy could actually spell good news.

The “tapering” you may have heard about refers to a gradual easing up on the central bank’s response to the financial collapse of 2008. Beginning in November that year, the Fed began buying up hundreds of billions of dollars’ worth of Treasury bonds -along with dodgy mortgage debt-in exchange for cash that it conjured out of thin air.

Unlike you and me, the Fed can take a pile of debt, swap it for cash, and then hang onto that debt until it reverses the process later, which takes cash back out of the economy. The idea is to fine-tune how much cash is out there: More money makes it cheaper (interest rates go down) less money makes it more expansive (rates go up.)

It’s been doing this-routinely-for decades. But the scope of this buyback-close to $4 trillion and counting-was anything but routine. Now, more than four years after the Great Recession ended, the Fed wants to get back to a more routine interest rate policy.

That’s a long time for an “emergency” policy. Why has it kept the money machine going for so long?

Very Interesting article by John Schoen of CNBC. Reproducing the same for the benefit of readers

Unlike past rebounds that saw the economy snap back like a rubber band, the recovery from the Great Recession has been very different. This time, the rubber band snapped completely during the financial collapse of 2008.

None of the periodic banking and market calamities since the Great Depression has done anything like the 2008 damage to the global financial system. Even today, credit is still hard to get for many small businesses and potential home buyers, two major drivers of economic growth.

That’s another reason the Fed wants to wrap up its epic money-making policy: It may no longer be working. Despite the trillions it’s pushed into the system, much of it hasn’t reached the broader economy.

So where did all that money go? It had to go somewhere, right?

Much of it went to fill the giant crater left in the banking system’s books after the industry’s wildly reckless spree of bad mortgage lending. Today, U.S. banks’ balance sheets are in much better shape, and they’re sitting on big piles of reserves. (In Europe, where the central bank took a much more conventional approach to the crisis, banks are in much worse shape. So is the European economy.)

Some of the cash has helped push global stock prices higher but not directly: The Fed bought bonds, not stocks. This year’s 25 percent market rally has been fueled by the record low interest rates the Fed has engineered by soaking up so much debt.

Those low interest rates on relatively safe assets like bonds forced investors to look for higher returns in riskier places like the stock market. Now, if the Fed reverses course and interest rates start to rise again, a lot of the cash flowing into the stock market will likely find a happy home in the bond market. That could turn this year’s stock market rally into a next year’s market rout. Which is why Wall Street has so dreaded “The Taper.”

Who else loses if interest rates rise?

Home buyers-and sellers-could also lose. Earlier this year, after a brief mention by Fed Chairman Ben Bernanke that The Taper was probably coming in 2014, mortgage rates shot up by a full percentage point in a month. They’re still under 5 percent for most borrowers, but if they go much higher, the slow but steady recovery in the housing market could get a lot slower.

Higher rates aren’t good for business investment either. Small business owners, who generally get a loan from a banker to buy new equipment or open up a new office, would have to pay more on those loans. Bigger businesses would have to pay higher interest rates on the corporate bonds they sell top investors to raise cash.

Many of the biggest U.S. corporations, though, are already sitting on large piles of cash they raised when money was so cheap. Still, while they may be able to grow their business with their own money, their profits would still be under pressure if higher rates put a crimp in their customers’ spending plans.

So why would the Fed cut back on all this money if it puts the recovery at risk?

The job of the Federal Reserve has always been to take away the punch bowl when it felt like the party was in full swing. But since 2008, the Fed has replaced the punch in the bowl with grain alcohol. There’s little evidence this party is getting out of hand-yet-but Fed officials are eager to get back to serving more conventional refreshments.

The main worry is that the $4 trillion pile of newly created cash will feed another bubble-whether in the stock or housing markets-that leads to yet another collapse. Fed officials have said they don’t see evidence of that. But they’ve also conceded that financial bubbles are very difficult to spot until its too late to deflate them safely.

Bernanke and his colleagues have also made clear that “tapering” means just that: The flow of cash won’t end abruptly. If interest rates suddenly spike, or if there are signs the economy is slowing again, they can always open up the spigots and restore the flow of money.

Much of the impact likely will be psychological: The Fed figures if the policy change is gradual enough, the impact will be muted. That’s why it began signaling it’s timetable-pegged to the unemployment falling to 6.5 percent-late last year. With the jobless rate now at 7 percent, we’re getting close to that target.

And as long as inflation remains “anchored” at low levels, the Fed’s policymakers have said they’re inclined to use other more conventional means to keep interest rates low.

If their timing is right, the recovering job market will finally begin gathering more momentum on its own. Lower unemployment adds more steady paychecks to the economy, providing a much more sustainable flow of money into the economy than the Fed’s bond buying. As that added consumer spending feeds demand, more companies can expand and hire more workers, adding more paychecks-and the cycle continues.

Or at least that’s what the central bankers are hoping.