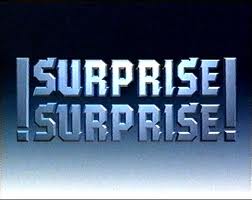 This is an Interesting information for all the Die Hard Bulls and Bears.  Looking at Fed Yellen Testament yesterday it seems to be true.

There has been a lot of concern that US stocks have gone too far lately without a 10% correction. The fear is that, if the market goes on too long without losing at least a tenth of its value off a high, any pullbacks to come in the future will be a lot more dramatic.

The analysts over at Bespoke Investment Group took a look at that question this week and came up with an interesting study. They observed that the S&P 500 has now rallied 59% over a period of 515 trading days since Oct. 3, 2011, without logging a 10% decline from a high. And while it is certainly unusual, it is by no means unprecedented, or even close to the longest such streak. 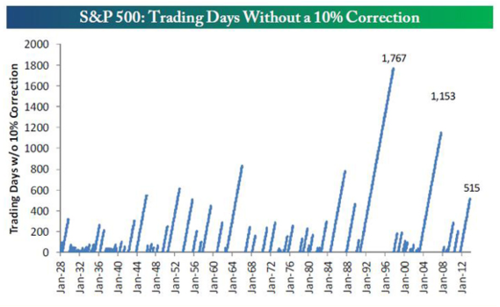 The chart above, created by Bespoke, highlights all past rallies without a 10% correction since the index was created in 1928. The current streak of 515 days is certainly well above average, but there have actually been two periods over the past 25 years that were more than twice as long!

The current streak would have to extend all the way out to Oct. 1, 2018 — five years from now — to match that record, which is kind of mind-boggling.

The bottom line is that, as long as a low-growth environment also features low inflation and an accommodative monetary policy, the price/earnings multiples of successful companies can rise a lot higher than most people think.

The current climate features weak revenue growth, and most earnings growth is being achieved by cost-cutting rather than new sales from innovation — two big negatives — but it can probably be conducive to higher prices as long as inflation and interest rates remain repressed in synch with central bank policy.