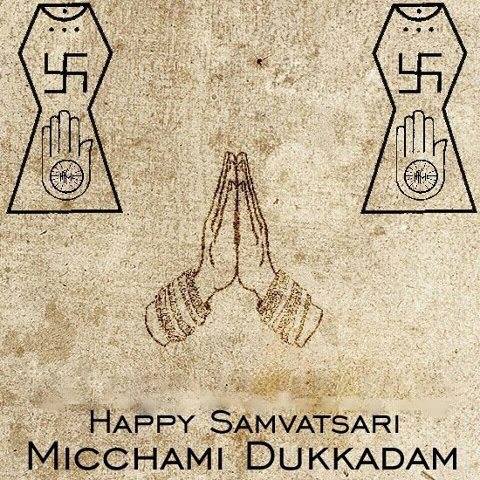 Paryushan parva is a time of reflection on our past year actions.  It is observed during every Chaturmas commencing on the twelth day of the shukla paksha of “Bhadrapad” month and ending on the fourth day of Krishna paksha of Bhadrapad.  It is marked by strict observance of the ten cardinal virtues:  Forgiveness, Charity, Simplicity, Contentment, Truthfulness, Self-restraint, Fasting, Detachment, Humility and Continence.  Though we should be doing this every second of our lives, it is nearly impossible to do so in this day of age.  Hence, we should at least take out 8 days a year out of our busy lives to reflect on ourselves.
During the eight-day / ten- day Paryushan festival, many fast and perform pratikaraman, meaning ‘turning back’.  It is a form of meditation where one reflects on his spiritual journey and renews his faith.  During this time, many drink boiled water and eat before sunset.  Many abstain from onions/garlic/potatoes (root vegetables), fermented food, and even green vegetables.  Penance and fasting are the key words in these days.  The reason for such restriction is to hurt as less living beings as possible.  Items previously mentioned have far greater number of lives (atmas) than simple grains.  For example, when you take any piece of potato and put it in water, it will grow.  but the same is not true for rice grain.  By doing this, we commit less sin and bind with fewer bad karmas.  this will later help us on our jouney to moksha.
On the last day, known as Samvatsari, many also observe a unique custom where they ask every individual they may have offended during the year for forgiveness.  Old quarrels are forgotten and friendships and relationships renewed as they fold their hands and say “Micchamidukkadam” or “Please forgive me.”