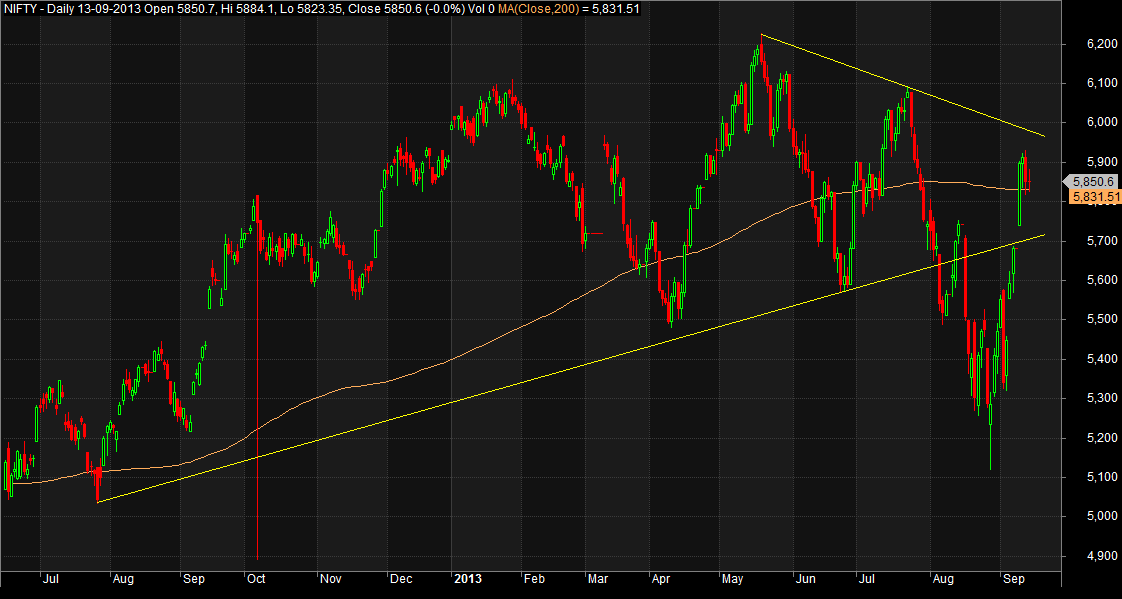 Last week we gave Trend Deciding level as 5686 Nifty  Nifty opened with big gap up and traders were unable to enter longs 🙁 .The government unveils data of inflation based on the wholesale price index (WPI) for August 2013 on Monday, 16 September 2013. WPI inflation is seen accelerating to 5.9% in August 2013 from 5.79% in July 2013, as per the median estimates of a poll of economists.The FOMC holds a two-day policy meeting on Tuesday 17 September and Wednesday 18 September 2013 to decide on Fed Tapering. The Reserve Bank of India will release a Mid-Quarter Review of Monetary Policy 2013-14 at 11:00 IST on Friday, 20 September 2013.

Lets analyze how to trade Nifty next week. Nifty Hourly charts as shown above is trading in a channel,Unable to close above 5946-64 Nifty can see pullback till 5738 odd levels.

For Nifty traders who follow gap trading there are 3 trade gaps in the range of  5300-6000 and all other gaps got filled.

Nifty daily chart has closed above its 200 DMA on weekly basis. On Upside any close above 5964 will break the lower top formation on larger time frame as shown in below chart. Unable to break the same the nifty can correct to lower end of trendline at 5716.  September has been Mostly Bullish month for Indian market Sep 2010 Nifty rallied 9% Sep 2011 Nifty was down 1.2% Sep 2012 up by 8% and Sep 2013 till date is up 6.9%. Nifty Fibonacci fan are wonderful tool to find the top and bottom in short term.The above chart is self explanatory 🙂

It was bullish week, with the Nifty was up by 170  and gaining 3% .Nifty has formed double Bullish engulfing candlestick pattern on weekly charts after the 2 hammer candlestick formation in past 2 weeks.Now Nifty is near a crucail trendline resistance as shown in below chart Any close above 5964 Nifty can quickly move 6050 odd levels.