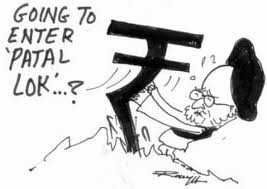 The rupee fell past 69 to the dollar to a record low on Wednesday, plunging as much as 4 per cent to hit 69.08, The rupee has fallen by 9 % in the last few trading sessions. Here are 10 main reasons that experts say are responsible for the Indian rupee — which has depreciated as much as 20 per cent this year — to touch new lows each passing day:

1 thought on “Reasons why the rupee is falling every day”