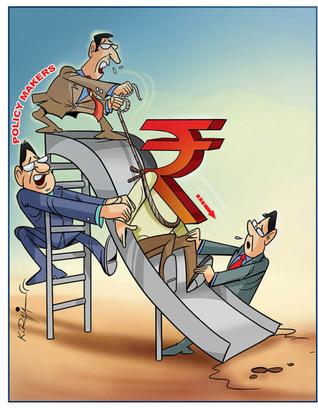 As per our last discussion  Can rupee touch 65 to a dollar ? Rupee achieved the target today.

Deutsche Bank came with an extreme bullish target of 70, Here are some expert of the Report

The rupee recovered by 10 paise to 63.15 against the US dollar in early trade today after the RBI announced fresh measures to curb volatility and ease liquidity situation.

Forex dealers said besides dollar selling by exporters, the Reserve Bank yesterday announced a slew of measures to ease liquidity, including Rs 8,000 crore bond buyback, to ensure adequate credit flow to the productive sectors of the economy, which also supported the rupee.

The Indian rupee could touch 70 against the US dollar in a month or so, although some revival is expected in the currency by the end of the year, Deutsche Bank said in a report on Wednesday.

“We continue to believe that fundamentally the rupee is undervalued and has overshot its equilibrium level substantially, but as numerous episodes of past currency crises have amply demonstrated, under a scenario of deep pessimism, currencies can overshoot substantially and remain so for a long time,” economists at the bank wrote in the report.

“India, we fear, is entering such a zone”.

The partially convertible rupee dropped to a record low of 64.13 per dollar on Tuesday and was trading at 65.6 on Thursday, weaker than its close of 64.25/26.