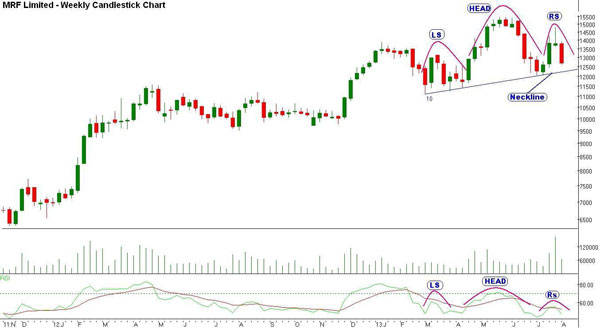 In Continuation of last week post on Reversal Candlestick Pattern for traders In this article we will focus on few important chart patterns,which will help you in making better trading decisions.

The head and shoulders is probably the most popular pattern used by technical traders. It is easy to spot and sends a very powerful trend-reversal signal. It is comprised of two shoulders and a head. The first shoulder is created by a rise in the security and a subsequent decline, forming a peak. At the base of the peak, price consolidates and rallies again, but his time rising above the former peak and again declines. At this point you can see the left shoulder and the head. When price rises for a third time, it doesn’t quite make it to the second peak (“the head”). This forms the right shoulder, and there is usually a sell off at this point. Why? Those who sold around the “head” are still in control and rallies are being thwarted by heavy selling. This can be a strong signal that the current up trend is in trouble. This can lay the foundation for a low risk entry trade. The Doji is another very popular and interesting pattern that tells a story. The security opens and trades above and below the opening price all day, only to close right at or very near the opening price. This gives us one very important piece of information. There is indecision. Neither buyers nor sellers are in control. This helps us because in a down trend, sellers are in control. If, after a downtrend you see a doji that could signal a shift in sentiment, or at the very least halt the selling. The reverse is true for an uptrend. When this pattern forms, it is best to have a “wait and see” mentality. The next bar that forms can either confirm the change in trend or continue in that direction.

As seen in below chart of LT stock formed DOJI pattern after downtrend and we got a reversal signal the next day with price opening above previous day close. The double bottom is a very popular pattern to the technical trader simply because it is straightforward. Price trades down to an area where buyers step in and bid prices back up. This causes a rally, forming the first bottom. After demand fades, price trades back down to the previous bottom and buyers step in again, at the exact same spot. What the market is telling us is that, buyers are willing to “defend” this area. Those who got long previously, can add to their positions. Buyers who missed the move have another shot at getting in. This are will serve as a key support zone if it holds up. IRB was a recent example of double bottom, From 52 to 71 in 4 trading sessions 🙂