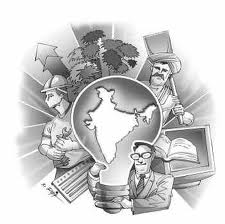 India further eased rules on foreign direct investment in a range of industries in an attempt to boost the economy which grew at its slowest pace in a decade during the 2012-13 financial year. Economic analyst Paranjoy Guha Thakurta explains what ails Asia’s third-largest economy.

For Prime Minister Manmohan Singh, the irony could not have been more cruel.

The man who is credited with lifting the country’s economy from the brink of disaster in 1991 as finance minister in PV Narasimha Rao’s government, is today facing a situation which is not very much better.

In fact, in at least two respects – economic inequality and the international exchange rate of the rupee – India’s economy appears to be worse off than where it was two decades earlier.

India is not in danger of defaulting on external financial obligations as it was in June 1991. Nor has Mr Singh’s government mortgaged the country’s gold to the Bank of England as it did then.

But India’s current account deficit – the difference between the inflow and outflow of foreign currency – touched $33bn (£22bn) in the quarter ending December 2012, reaching a historical record level of 6.7% of the gross domestic product (GDP).

Though the deficit has narrowed since, the situation is far from comfortable. The deficit is also the principal reason why the Indian rupee has dipped to an all-time low (12%) against the US dollar over the last month.

For the financial year that ended on 31 March, India’s GDP grew by 5% -the slowest in a decade.

This is particularly disconcerting for a government that has been emphasising growth over everything else in its economic policy.

Unfortunately, none of this has happened.

Savings and investments are down.

Investments by Indian businessmen abroad have overtaken foreign direct investment for the first time, even as the government desperately woos foreign investors and is nervous that international credit rating agencies will soon downgrade India.

If that indeed happens, it would exacerbate an already-bad balance of payments problem.

The government has lifted caps on foreign investment limits in various sectors, especially telecommunications. Finance Minister P Chidambaram insists that the India “growth story” will return soon and that what the country is currently facing is a temporary aberration.

But markets remain bearish and there are few signs of a revival in investments, both domestic and foreign.

For instance, in December, the government opened up the retail market to global supermarket chains in the teeth of opposition from not only its political opponents but some of its coalition partners who subsequently parted ways with the ruling Congress party. But the likes of Wal-Mart and Tesco are yet to announce plans to invest in India.

Employment opportunities have not expanded fast in the recent past, even when the economy was growing rapidly at around 9% for four years in succession between 2004 and 2008. The creation of new jobs has slowed down further now that the economy is growing by only 5%.

Many believe that the single biggest failure of the government’s economic policies in recent years has been the inability to control inflation in general and food prices in particular.

Many reasons – such as changing dietary patterns on account of rising incomes and higher fuel prices – have been forwarded to explain why food inflation has been in double-digits or close to that level for the better part of the last five years.

What cannot be denied is that high food prices have hurt the poor much more than the rich or even the middle classes, simply because food constitutes a larger proportion of total household incomes the lower one moves down the economic ladder.

Many argue that what food inflation has done in effect is to widen the gap between the rich and the poor, deepening inequality.

The government says the worst is over and that the economy will revive in the near future.

The problem is that their optimism is shared by few.

Mr Singh has often argued that there is no difference between good politics and good economics. But what the government has ended up doing may hurt it both economically and politically.

Sharp rises in fuel prices, for example, will hardly help it gain popularity with voters.

The Congress-led ruling coalition was dependent on its Communist allies for a majority in parliament between 2004 and 2008 and had to tone down some of its market-friendly policies.

However, since 2009, the Congress has been in-charge of the ruling coalition and it cannot blame the Communists for stalling reforms.

Yet, India’s economic situation has taken a sharp turn for the worse in recent years. And that’s bad news for the government in the run-up to next year’s crucial general elections.