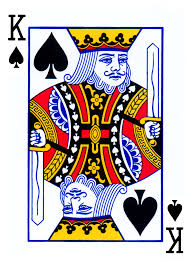 If you are a disciplined, follow the rules trader, then I am sure you are familiar with the many and various ways the stock market can play tricks on you.  For instance, a disciplined, technical trader will adhere to a particular strategy based on current market conditions.  In so doing, trades are assessed and entered based on specific criteria, usually by combining mechanical and discretionary means.

Technical traders base their current trade decisions on past price action, noting distinct historical patterns that have the possibility of replication.  However, the outcome of two strategically similar trades are never exactly alike if for no other reason than those trading a specific stock now are not the same ones who traded it two months, or even two weeks or two days previous.  The elements of uncertainty (e.g., changes in sentiment and differences of opinion) exert such an influence on stock prices that exact replication is impossible.  Therefore, the market enjoys a “King Jester” status.

The market is king.  We have no control over its directional bias, day to day actions, or its seemingly often illogical ways.  The market will do what it wants, when it wants, how it wants, and for as long as it wants to whomever it wants. It is king.

The market, then, can act as it pleases, even as jester, behaving foolishly and mocking us, making fun of our grand designs played out in our charts and graphs with our clearly defined historical patterns.  We give these patterns easily identifiable names such as head and shoulders, wedge, triangle, marshmallow stick, three black crows.  You get the idea.  Patterns make us feel all warm and fuzzy inside, secure in our confidence that the past will indeed repeat itself.  But then King Jester takes the stage.

King Jester holds in one hand a crystal ball; in the other a chart, balancing and juggling the two.  The jester entertains.  The jester makes us laugh.  But as all great jesters know the real joke is on us.  The jester reveals our biases and the silly ways we plan our days and our lives, as if we really have that much control over either.  So when we laugh we laugh at ourselves.  After all, do we really believe the future is revealed in some chart?  Sadly, there is always the heckler.  The one who is serious about his fortune telling abilities.  Mocking the King Jester.  Making fun of him.  Telling King Jester he is wrong or stupid or stupidly wrong.  When King Jester drops the crystal ball or can’t read the chart for farsightedness, the heckler gets angry and makes fun of the King.

When the act is over and the curtains are drawn, it is the King Jester who gets the last laugh.  The crystal ball is always cracked and the charts are 20/20 only after the fact.  Expectations are dashed; hopes and dreams are postponed or diverted.

In the end, we can do little more than laugh with King Jester and laugh at the heckler…recognizing the wisdom of the former and the foolishness of the latter.

In the end, we plan our trades knowing that some will fail, some will succeed, and some will go on without us. Whatever the result, we laugh. We laugh with King Jester and we laugh at ourselves.

1 thought on “Stock Market Is King”