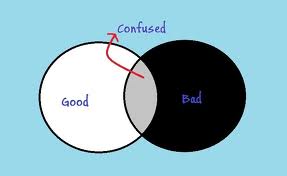 Bad trading is actually much closer to gambling. One of the key differences between Bad trading and good trading is that Bad traders don’t just play the odds: Bad traders play the unknown. The market simply isn’t predictable enough – enough of the time — to allow for the type of returns that Bad traders seek. So, Bad traders are much more likely to be going out into that unknown space. This seeking out the unknown always involves a cost. The cost for Badness is the potential for loss, even significant loss. A Bad trader will typically take more risks. The risks could involve taking trades with higher uncertainties (less confirmation), higher risk per trade (giving a trade more room), and in general just a higher level of risk. This increased level of risk taking is balanced by increased trading skill.

The problem with trading just trading well is that the game, the trading game, is really close to a zero sum game, even when played perfectly. The focus on limiting risk tends to ignore the reality that every business has to make a profit to survive. The problem with trying to avoid risks is that it tends to push the game to such a competitive level such that the trader must trade at a near perfect level just to break even and nobody can trade perfectly forever. Eventually mistakes are made and losses occur. Bad traders are more creative. They move laterally and find creative solutions. Bad traders don’t really compete against others. It is more of a dance. Instead of playing the games against others, they make up their own game.

Bad traders are much more aggressive then good traders. A good trader may set a stop loss at a predetermined level and take the stop out mechanically – only to watch in frustration as the trade instant reverses and works out to their original plan. Bad traders monitor the market with the knowledge that the stop out may be a bad stop out. They watch the market and try to determine whether they should get re-enter or take the loss. Often, the correct action is an aggressive re-entry and that can mean the difference between winning and losing.