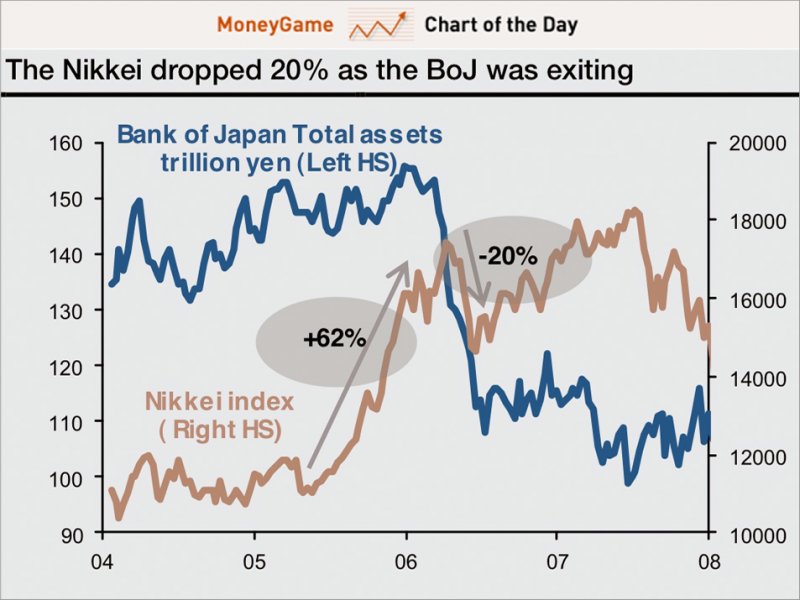 Traders around the world are anxiously waiting for the  Ben Bernanke  decision of Fed tapering the QE and give  updates us on the direction of monetary policy in coming future.

Markets and commodities over the  last few weeks have corrected sharply, mainly due to the fear created around the Tapering of Asset Purchases by the US Federal Reserve as liquidity will be withdrawn from the world markets. Indian Rupee is trading at life lows because of the same reason as market participants have started fearing FII outflows.

So will the worst fear of market participants come true in Stock market crash if Fed tapers the QE?

Lets dig into History and try to analyses  Japan’s experience with QE tapering in 2006.

“In March 2006, the Bank of Japan (BoJ) announced the exit from QE, amid signs that activity was accelerating and the economy was emerging from deflation,”

“The BoJ exit provides interesting insights regarding what we may expect from the Fed in the coming quarters.”

The Nikkei declined by 20% between April and June 2006 after having increased by 60% in the preceding 12 months (see chart). The sell-off was nonetheless short lived. The exit from QE in Japan was conducted in just 3-4 months, mainly by reducing the amount of bills purchased from private banks, i.e. the most flexible asset on the BoJ’s balance sheet. Holdings of longer-term JGBs were reduced very slowly and moderately; the BoJ actually kept in place its regular purchases of longer-term JGBs. The BoJ also implemented liquidity operations to ensure the stability of interbank money markets.

So if Fed exits QE completely we can see same knee jerk reaction  as in Japan which will be bought into in coming days with money lying on sidelines.

Also with Tapering of QE which will be very very positive for India as  10% decline in just two commodities, i.e. Gold and Crude would reduce the import bill by $ 20 billion which is equivalent to the total inflow of FII’s in a year. This would also reduce the inflation and Fiscal Deficit, lead to lower interest rates and higher growth. As such from a pure economic growth perspective we would rather have lower commodity prices than some incremental liquidity flows.

Priming the Trading Mind for Performance