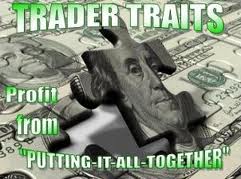 Great traders have really mastered a core set of skills:

Below, I review each core competency in greater detail:

1. They recognize when they are wrong.

2. They incorporate new information into their existing plans.

3. They execute at a high level. They perform.

Most traders have experienced watching a trade that is stopped out and then starts to reverse and go in their favor but they don’t execute.Great Traders don’t delay. They act. They are able to act because they’ve worked through the mental garbage that inhibits and limits most other traders. They’ve approached the game with meta-awareness and have adapted to focus on their key trading strengths and eliminated aspects in their trading that was limiting and distracting. As a personal example, I found my performance improved dramatically when I quit worrying about where to place my stop and just entered with a fixed stop.  Utilizing the fixed stop loss allows me to enter trades more rapidly which often proves a significant advantage. And, without having to spend precious brain power trying to determine the best stop loss, I am able to focus more on what the market is actually doing , what it is likely to do next, and adjust in real-time. These adjustments introduce new risks and required generating new structures for managing those new risks. In essence, great traders have incorporated a series of better designs into their trading.

4. They recognize when they are right and they push their winners.

The novice often entertains the incorrect idea that it is possible to cut out the losing trades, and that successful traders simply don’t lose. The reality is that avoiding bad trades is nearly impossible. Instead of focusing on avoiding losses, great traders focus on maximizing their best opportunities. Of all the skills of great trading, the ability to push the best trades is one of the most important which is why I’ve saved it for last. Every trade has a different pay off. Most trades have probably about as much chance of making the trader money as losing the trader money. But, a smaller percentage of the trades are good trades and have a marginally higher probability of making the trader money and an even smaller percentage of the trades have a very high probability of working out. For hypothetical purposes, imagine 3 trades. The first trade has a 50/50 pay off, the second a 60/40 pay off, and the final one has an 80/20 pay off. Ask yourself, does it really make sense to bet as much on a 50/50 pay off as an 80/20 pay off? Of course it doesn’t make sense to bet the same amount when the odds are different. Yet, many traders insist on betting the same amount each time. A reasonable reason to bet the same amount each time is that varying the position size introduces difficult to quantify risk. A wholly different reason among small futures traders is that the contract sizes are so large in relation to the account that essentially they are always forced to bet the max — which isn’t desirable.
Of course, there is one more than one way to push a great trade. The simplest and often effective method is to simply add more contracts. A variation is to allow the open profits to increase to a greater degree without increasing the contracts. One can also increase the stop, target, or in general give the trade more room. All of these methods increase the risk and the potential for reward.

It is notable that the ability to take more risk when one has a greater confidence is one of the greatest distinctions between liquid markets – like the S&P 500 – and most gambling games. The market simply doesn’t care how much you desire to bet and the cost for betting more is marginal – unless you’re a huge whale. While it may technically true that you can bet as much as you’d like in a no limit poker game, you can be sure that equally skilled players will respond by simply folding or only calling when the probability of your winning is only marginal. It makes sense that great traders capitalize on one of the defining distinctions between markets and gambling games.

As mentioned earlier, great trading is in many ways dangerously close to gambling. The higher levels of aggressiveness, risk taking, and uncertainty that characterize great trading must be paired with equally rigorous risk management and performance monitoring.