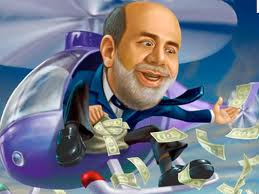 While Fed officials are at pains to point out that their two policy tools (asset purchases and rates) the markets continue to link them and the latest increase in Taper chatter has dragged expectations for the first rate hike dramatically forward. Just a month ago, expectations were as late as Jan 2016 but Fed Funds futures have collapsed in recent weeks to imply rate hikes begin in Jan 2015 – a level of ‘tightening’ not seen since early Summer last year. Bernanke has stated that his communication is aimed at “reducing the risk that market misperceptions of [FOMC] intentions would lead to unnecessary interest rate volatility,” but just as with Kuroda, the market seems to not be agreeing and, as we note below, there appears a good, bad, and ugly ‘taper’ scenario for today.

Several Fed officials have sounded more optimistic on the outlook recently, including noted doves (and current voters) Charles Evans (Chicago) and Eric Rosengren (Boston). Other core Fed officials, such as Chairman Bernanke and New York’s Bill Dudley, sound less convinced in recent remarks and seem to have reluctantly acknowledged that tapering before long is not outside the realm of possibility. If we get a sustainable improvement in the job market data and inflation converging back toward target, that outcome should leave the markets relatively comfortable with the Fed beginning to modestly pull back its accommodation. In that case, markets should be able to transition from Fed-led liquidity support to a better growth-led recovery story.

The ride could be bumpier if markets conclude the Fed has grown more concerned about QE costs and is ending QE prematurely. We don’t see these concerns motivating the voting majority to taper early: Bernanke and Dudley, for example, admitted to monitoring for financial instability but concluded that the benefits of continued QE outweigh the costs. For some market participants, the current talk of tapering is at odds with the still weak outlook, leading them to conclude that the Fed isn’t acknowledging its true degree of concern over QE costs. Others disagree with the Fed’s current assessment of risks, and expect the Fed will eventually have to tighten policy much sooner than they have indicated. In either case, the process will be more volatile: tapering seen as premature is likely to spur risk-off behavior and increases the odds that the Fed will eventually decide to scale back up their purchases should the data worsen.

A view gaining some traction is that the Fed is discussing tapering because it actually has a lower threshold than indicated, perhaps for some technical reason. There are several variations to this view: the Fed wants to introduce volatility; it wants to “send a message” to the markets; it wants to test a small taper to see the response. Such scenarios would be quite tricky for market participants: they not only fail to clearly identify the Fed’s longer-term reaction function, but also presume the Fed, in part, is hiding its true motives.

The Fed does not typically work this way – not only do these stories run counter to the greater transparency under Bernanke, but they tend to undermine the Fed’s ability to satisfy its dual mandate. Thus our temptation is to fade these stories, but we cannot completely rule out some kind of early, small, technical adjustment to QE. The Fed is limited by a lack of consensus over QE, but they arguably could clarify their reaction function better than they have to date.

This article is complied from internet not written by me.