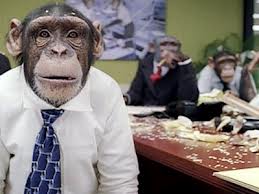 Humans aren’t the only gamblers in the animal kingdom.

Our closest primate relatives, chimpanzees and bonobos, demonstrate behaviors considered basic to human economics such as delaying gratification and assessing risk, according to new research published Wednesday May 29 in the journal PLoS One.

Though they don’t bet on stock exchanges or casinos, they also have strong emotional reactions to games of chance — like when they are betting on food showing up. They don’t like losing or waiting for payouts, and can even correct their own behaviors based on successes or failures.

“Apes are also experiencing rich emotional reactions in an economic context,” study researcher Alexandra Rosati, of Yale University, said in a statement. “They are making decisions about their most valuable resource, which is food.”

“Even though economists can be quite puzzled about human behavior and what it means, biology suggests that these economic biases have their roots in non-human foraging behaviors,” Rosati said.

Researchers performed two tests on 37 wild-born chimpanzees and bonobos from sanctuaries in the Congo.

In the first, they tested how long each ape was willing to wait for a big reward when a smaller one was already in front of them. In the second, they asked apes to choose between a “safe” reward — like some peanuts visible in a dish, or take a risk by blindly reaching into another dish for a hidden reward that could either be better or worse than the safe reward.

The two species of apes reacted differently, but both showed behaviors like those used by humans in economic contexts.

The chimpanzees were able to delay gratification — they were willing to resist a small treat once they knew a bigger one could be on the way, a risky move because they could lose out on both by waiting.

On the other hand, bonobos adapted their behaviors based on experience. They stopped taking risks if they kept losing their gamble.

The animals emotions didn’t always seem to align with their decisions — the easily angered chimpanzees were more patient and bigger risk takers.

The calmer bonobos were less patient and more risk averse. They did not wait for the larger treats, and they quickly adjusted their behaviors if they made losing gambles. This evidence surprised the scientists and clouds the common assumption that feelings like regret and frustration affect our economic behavior.

“Emotional reactions are thought to be important in human economic decisions,” Rosati said. “One of the things that deters people from being too risky is that you feel upset if you gamble and lose.”

Rosati and Hare think this suggests that economic behavior evolved to fit the natural environments of different species.

Bonobos live in regions where food is abundant, whereas chimpanzees live in environments where food is scarcer and varies in availability from season to season. The chimp’s patience and risk taking could have held a food-finding advantage.

Chimpanzees frequently hunt small monkeys for food, which can be an economically risky behavior — hunting takes a lot of energy, and hunters don’t always catch their prey. They will also travel a lot further to seek out a higher quality fruit patch, suggesting they have a higher capacity for patience.

In like manner, it is possible that nature may have tailored our own capacities for risk, patience, and emotional control to suit our own evolutionary needs. Behaviors that might seem irrational through the sober eyes of economics may have some kind of biological basis, and therefore may not really be irrational at all.

The study certainly proves that we aren’t the only ones with the power to weigh risks and rewards.

“I think this kind of study shows that they have the cognitive skills to do these kinds of cost-benefit analyses in much the same way as humans, and they seem to be assessing risk very similarly to humans,” Rosati said.

This Article is complied from net.