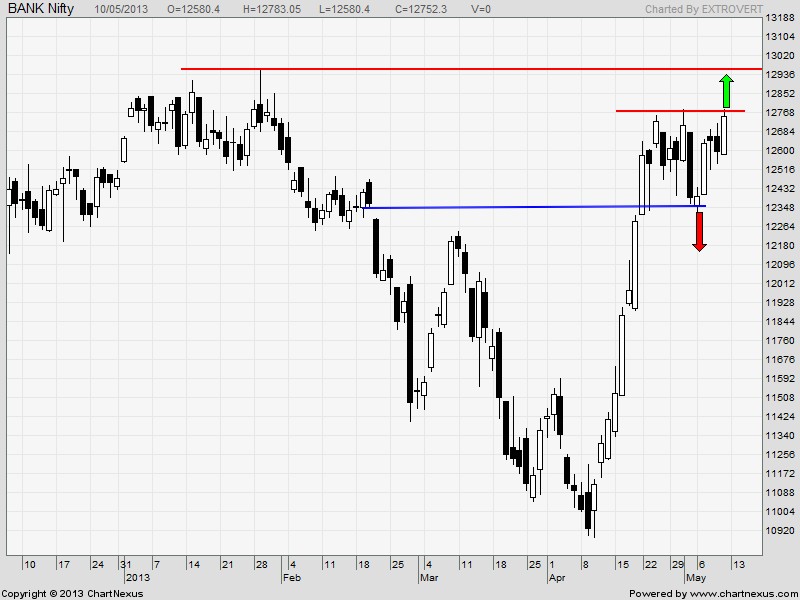 Last Week we gave Bank Nifty Trend Deciding level as 12363 and it did 1 target on downside and achieved all upside targets.

As discussed in Nifty Weekly Analysis, Nifty gave a breakout but Bank Nifty will give only above 12800, So lets discuss how to trade Bank Nifty in coming week. Bank Nifty has been facing resistance at  12783 odd levels and formed multiple resistance in that line also forming an triangle formation which will breakout above 12800, failing to do so pullback till 12300 can be seen. Bank Nifty has broken the up trending channel and took support at upper gap area of 12363,bounced back sharply to upper end of trading range at 12783 but unable to break the same.Breakout of range comes above 12800 with an eventual target of 13050. Fibo Fans has been applied on Bank Nifty weekly charts and its show 12780  emerging as resistance,BN made high of 12783 and pulled back 3 times  🙂 Support at per Fibo Fans comes at 12300. Monthly charts are approaching the long term trendline and made another attempt to touch the trendline @12783 .Higher time frame breakout are very strong signal so if we close above 12960 on Monthly basis its a bullish sign.

Moving Mountains, One Shovelful at a Time

Profiting from Weekly Options Selling of Nifty and Bank Nifty