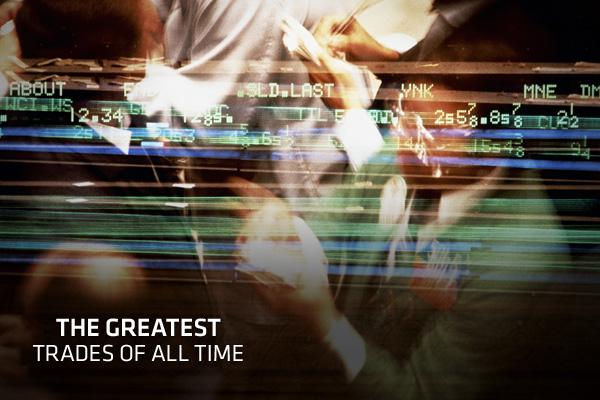 While the risk management  while executing many of these trades is not what many traders would want, we can see many of these as trend trades and the dangers of fighting the trends. These trades were not all entered into at one time,  most of  them were built slowly and grew by adding as profits accrued. Livermore made many probing shorts that he had to stop out as the bull market reversed off support and continued upwards. Some of these traders had the sell button ready in case a reversal knocked them out. Some could have been ruined with a little blind sided government intervention that modern day traders are faced with now. But you can not argue with the profits and many of these traders have very long proven records, these were not random trades and they did not just get lucky, most of these were the great play that they landed after decades of research, study, and trading.

1. John Paulson’s bet against subprime mortgages made his hedge fund a cool $15 billion in 2007, that is billion with a ‘B’. he is only one of a very exclusive club that was able to make this call and win with it. That was a call of a lifetime that everyone was blind to even deep into the crises.

2. Jesse Livermore’s call on the Crash of 1929, Jesse Livermore did not need any computer models, technical indicators, or derivatives to make $100 million dollars ($1.2 billion in today’s dollars) for his own personal account during a time where everyone was bullish and then everyone lost through shirts. It is an amazing day when you come home and your wife thinks you are ruined and you had the second best trading day of anyone in history.

3. John Templeton’s invested heavily into Japan during  the 1960s, when Japan was beginning its three-decade long economic miracle, Templeton was one of the country’s first outside investors. At one point, he boldly put more than 60 percent of his fund in Japanese assets.

From its foundation in 1954, his Templeton Growth Fund grew at an astonishing rate of nearly 16 per cent a year until Templeton’s retirement in 1992, making it the top performing growth fund in the second half of the 20th century.

4. George Soros’ breaking of the bank of England by shorting 10 billion worth of pound sterling and forcing the U.K. to withdraw from the European Exchange Rate Mechanism (ERM). Soros made $1 billion in the process, which was an unimaginable sum back then.

5. Paul Tudor Jones’ shorting of Black Monday Paul Tudor Jones correctly predicted and profited handsomely from the Black Monday of 1987, the largest single-day U.S. stock market decline (by percentage) ever. Jones reportedly tripled his money, making as much as $100 million on that trade as the Dow Jones Industrial Average plunged 22 percent. Another amazing trade to walk away from  with a fortune with so many others ruined in the aftermath.

6. Andrew Hall’s Back in 2003, when oil was trading at $30 barrel and the economy had just recovered from the dot-com crash, Andrew Hall wagered that prices would top $100 per barrel within five years. When oil prices blew past $100 five years later in 2008, Hall’s employer Citigroup made a bundle and Hall took home $100 million as a part of his compensation for this and other successful trades. He predicted the amount of the trade and the time frame and structured futures contracts to profit greatly from the move to $100 or expire worthless. He did what is suppose to be impossible, predict a price and execute a trade perfectly far in advance for maximum profit.

7. David Tepper’s bought severely depressed shares of big banks early in 2009, Bank of America and quadrupled in value and Citigroup tripled in value from their bottoms earlier in the year.  That was good enough to earn Tepper’s hedge fund $7 billion. His personal cut was $4 billion. His bet was that they would be bailed out and not nationalized. He was correct.

9. Jim Rogers’ spotted the secular bull market for commodities way back in the 1990s. In 1996, he created the Rogers International Commodity Index. Subsequently, he worked on ways to make that index invest-able. Since 1998, the index has returned 290 percent through the end of 2010. This compares to the 10 percent return of the S&P 500 Index during the same period.

10. Louis Bacon’s made a killing in 1990 by anticipating that Saddam Hussein would invade Kuwait. Bacon went long on oil, short on stocks, and helped his new hedge fund return 86 percent that year. In the following year, he also correctly bet that the U.S. would quickly defeat Iraq and the oil market would recover.

3 thoughts on “Greatest trades of all time”

Financial Astrology: How to Forecast Stock and Commodity Prices

How Long Did It Take You To Become A Profitable Trader

Will Aspect of Mercury and Uranus Provide Relief to Bulls ?

Will Aspect of Mercury and Uranus Provide Relief to Nifty Bulls ?