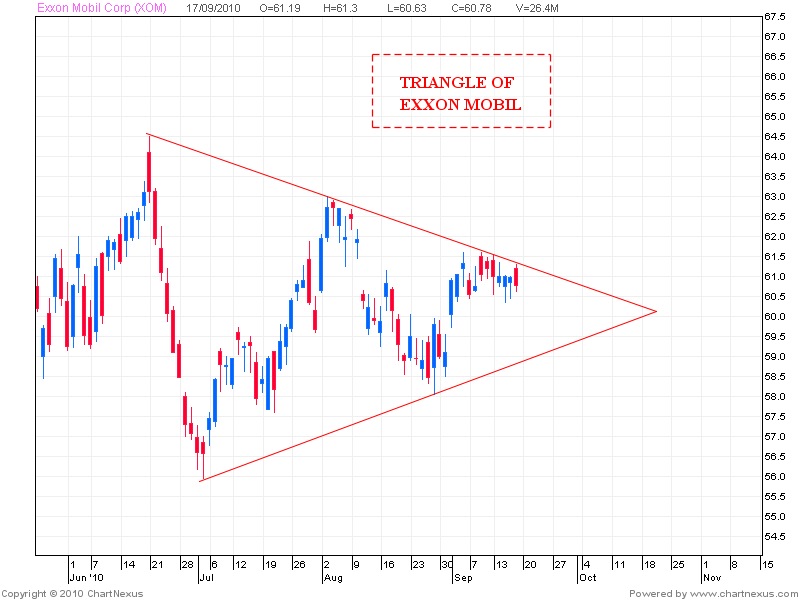 A Chart Pattern is a distinct pattern formed on stocks/commodity chart which help in identifying the future price movements.

When price of stock/commodity stays in a trading range and with passage of time the trading range becomes smaller ie. Contraction of price and convergence of trendline leads to formation of triangle pattern.  Triangle pattern are generally identified by consolidation in the trend followed by breakout pattern in direction of continuing trend. As seen in above chart of Exxon Mobile price action is getting contracted with Trendline convergence leading to formation of triangle pattern.

Identifying triangle patterns allows for trading opportunity during formation and after a breakout from the pattern.

Lets discuss the Symmetrical Triangle Pattern in details to understand how trading signals can be generated. Remaining 2 pattern will be discussed in later articles

Symmetrical Triangle:  This pattern comprises of price fluctuation where each swing high and swing low are smaller than its previous move. Volume tends to fall as the pattern develops and breakout is confirmed with a sharp increase in volumes. Trading activity diminishes till the apex of triangle is reached.

Symmetrical chart pattern should contain at least 2 lower highs and 2 lower lows. Also the High (2) should be lower than High (1) with upper trend line slopping down. Similarly Low(2) should be higher than Low(1) and downward trendline should be slopping on upside. Volume should decline during the formation of the pattern.

Let’s elaborate the formation with an Example of TATA MOTORS daily Chart.

As seen from the below Chart TATA MOTORS is trading between the Price Range of 208-160.  During the Course of Trading TATA MOTORS made  lower Highs which are 196 and 185 to form a downward slopping trendline.

TATA MOTORS also made Higher lows 167 and 169  to form a upward rising trendline.

Volume activity has diminished with the Contraction in trading range. Consolidation is happening till the apex of triangle before we see a breakout. There are two key components to a symmetrical triangle breakout:

For a breakout Confirmation should be on Closing basis only.

For upside breakout, stock should close decisively outside of the triangle formation with a pickup in volume. Breakdowns also require a decisive price break of the formation, but the volume does not need to display a significant increase in activity.

Target Calculation: The difference between the Top and Bottom of range  is calculated and applied to the breakout/breakdown point.

Let’s explore further how TATA MOTORS reacted after reaching the Apex of triangle.