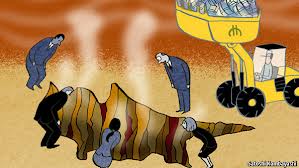 This is Insane, People loosing 7-10% of capital on Life saving with just one executive decision by Cyprus Government …..Cash machines on the island have already been reprogrammed to print out a warning of the so-called “stability levy” which will see 6.75 per cent extracted by the Cypriot government from every bank account on the island, and 9.9 per cent if the deposits are more than 100,000 euros. This will raise a sum worth 5.8bn euros, or a third of Cyprus’s GDP.

May hurt bank ratings across Europe; shows EU will act to monetary Union

Yield hunt may mean risk-off tone may be short-lived; in the contagion stakes, Cyprus has clear potential to “punch far above its weight”

There is room to amend Cyprus agreement

Compared with banks in Italy, Spain and Ireland, “the risk of the same occurring is extremely low and close to zero, but we could go through a short period of nervousness until we see how the rest of Europe responds and the ECB responds”

While controversial, involvement of non-residents in bailout was foreseeable, and “sends signal” to taxpayers in other nations that domestics won’t bear costs alone

Contagion potential – The Cypriot tax is certain to prompt depositors in GIIPS banks to assess two issues: (1) the probability of savings participating in bank clean-ups (“bail-in”) and (2) perceiving their savings as a potential base for a “wealth tax”.

Difficult to overstate the extend of popular anger in Cyprus; return to “more stressful” episode of debt crisis possible

Bailout may be crisis trigger; “this will probably go down as an ill thought out rescue plan with consequences for peripheral Europe”