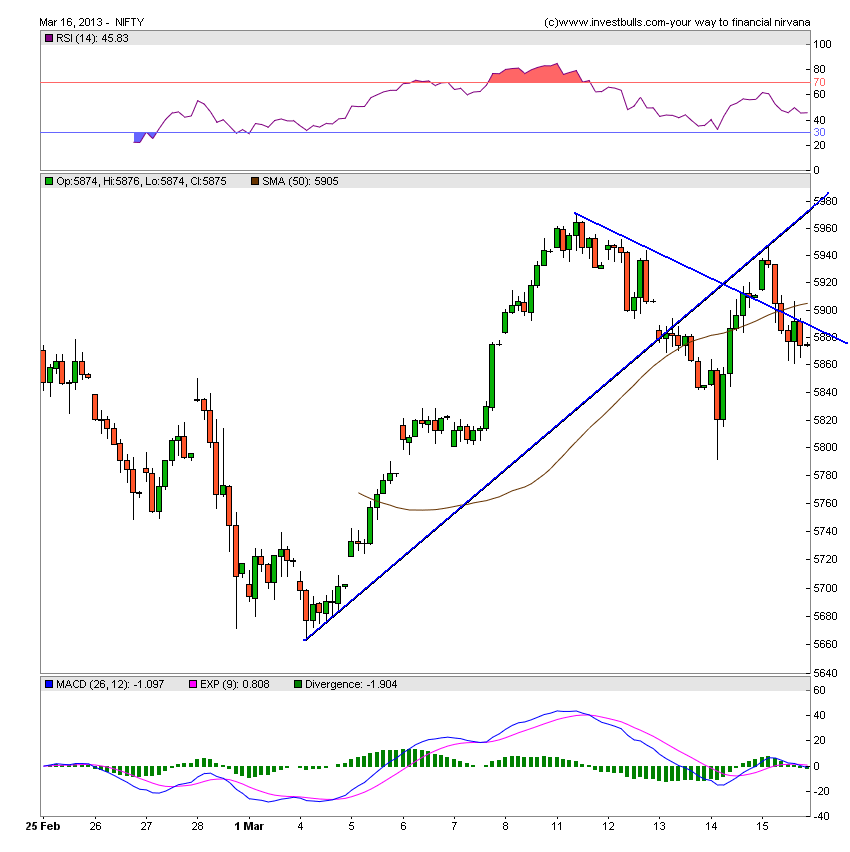 The RBI’s Fourth quarter monetary policy meet scheduled for the 19 March will also be keenly awaited by investors and traders. As CPI climbed 10.9 per cent in February from a year earlier, compared with 10.8 per cent in January, it has raised concerns about the extent of rate cut by the central bank on 19 March.Stock prices whipped in both direction in volatile week and Nifty ended down 1.2% or 73 points  WoW basis.

Last week we gave Trend Deciding level as 5971 Nifty made the high of 5971 turned back, achieved all the weekly targets on downside. Traders following Weekly trend deciding level should have minted good money. Nifty Hourly charts are trading in a crossover region of rising and falling trendline which signify volatile move in small range. Nifty is trading below 50 SMA @5905 and unable to breah the same before RBI policy day will put pressure on Nifty.

Nifty daily chart bounced from the red line support level as seen in below chart.Nifty is unable to break its 50 SMA on closing basis for 8 times in a rown from Feb 8, making 50 SMA@5937 as the zone of resistance for Nifty.Crossing the same Index has another test at 5971. On Downside below 5785 Index outlook turns bearish with the possibility of a decline to 5,679 or 5,511 in the upcoming weeks. Daily charts has formed a symmetrical triangle formation which signify breakout above 5971/breakdown below 5842 is round the corner.  Indicators are still in positive direction so Index can keep grinding in the range of 5840-5945 before the RBI policy. Fibonacci Arcs are half circles that extend out from a trend line.Fibo arcs mark potential support or reversal zones to watch as prices pullback after the advance. After a decline, Fibonacci Arcs are used to anticipate resistance or reversal zones for the counter-trend bounce. Nifty has taken support at 38% or the 1 Fibo Arcs last week. Holding the same@5872  we can see a counter trend move till 5945-5971 As per of Fibo Retracement theory Resistance at 5941 which is 61.8% retracement and  Support at 5835

Nifty closed the week negative  with loss of 73 points @5873. On Weekly chart nifty was unable to cross the zone of resistance of 5954-5972 which is trendline resistance as shown in below chart marked with red line las week. Trend line resistance has come down to 5920 odd levels. Support exits as 20 Weekly Moving average @5872 Monthly chart declined after taking resistance at 6112. Till Nifty does not cross 6034, Monthly charts will remain bearish.Monthly chart are now near important trendline support of 5672 as discussed last week and Nifty made a low of 5664 and bounced back. Analyzing Higher time is always beneficial for positional traders.