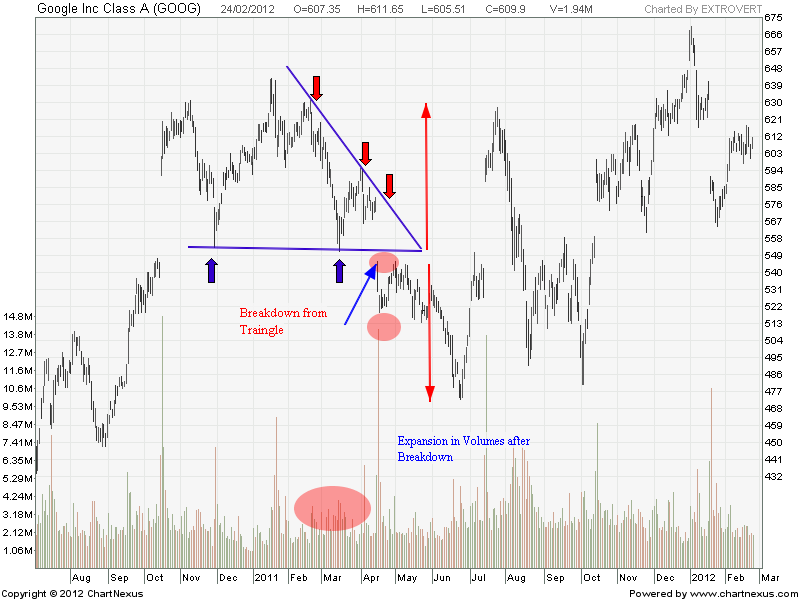 Descending Triangle: This pattern comprises of 2 trendline, one drawn horizontally to mark the support, second trendline is downward sloping trendline formed by joining the lower highs. This pattern is classifies as . Volumes generally diminish during the formation of the pattern and when breakdown/breakout occurs volume expansion occurs for pattern confirmation.

Descending Triangle chart pattern should contain at least 2 or more similar low not exactly equal but in proximity to form the lower horizontal trendline. To form the downward slopping trendline at least two lower highs are required. We would set an entry order below the support line and buy order above the slope of the lower high..

As seen in the below chart Google has formed support at 553 for 2 times from Nov-10 to Mar-11. Price has gradually started making lower highs which signify sellers are gaining control over Stock.

On 15th April 2011 Google announced its first quarter results which were below the market expectation and Stock tanked almost 8%. Stock broke its support of 553 with a huge gap down.

Descending Triangle Breakdown is seen in the below chart after it broke 553 supported by expansion of volumes. Triangles like other chart patterns are subject to many false moves Most traders allow for a 1 to 3% move outside of the pattern with expansion in volume before the breakout is considered as valid .  When a breakout occurs, the trend that results is expected to be in the direction of the breakout.

The Chart below is of Nifty futures 30 minutes chart with a descending triangle. Pattern also shows two false breakdowns as NF went below 5997 but quickly recovered leading to triggering of Stop loss for traders. The triangle chart pattern is one of the most reliable patterns, when traded with proper stop loss. Triangle breakout should be confirmed using Volumes and Indicators like MACD,Stoch to avoid whipsaws. Trader should always using trailing Stop loss to protect the profits.

You can register your email address under Post In your Inbox(Right Side Column) if you want to receive mail instantaneously as soon as site get updated. You will receive a confirmation mail in your registered email address you need to click on link to get it confirmed