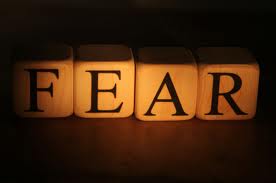 One of the best article read in recent time, Reproducing the same for blog readers

Fear is a misunderstood emotion, and one that gets a pretty bad rap these days. We owe our survival as a species to the hard-wired fear that kept us safe from physical threats for hundreds of thousands of years.

But what about the litanies of fears that plague traders every day? Fear of losing, of watching profits disappear, of making mistakes, of missing out?

Perhaps the larger question is this: If almost every trader feels fear, why do millions of people continue to trade? The answer lies in the way that fear is perceived.

For many, fear is a predator that’s constantly lurking, sneaking up on them, ready to attack at any moment. In this mindset, they’re always running away from fear, crouching in a corner, or looking for a safe place to hide. Fear blinds them to opportunity.

For others, fear is the prey. They move steadily and with discipline in the direction of the fear — always keeping it in front of them. As they approach the fear, they see it for what it really is.

F.E.A.R.: False Evidence Appearing Real. They see fear as something to go through in order to get what they desire — better trades and more profits.

For them, fear isn’t a brick wall, but a soft illusion. The closer they approach the fear, the smaller it becomes, and the stronger and more powerful they become. They have a trading strategy and a plan, and they aren’t afraid to execute. They use stop-losses and let profits run. They aren’t attached to the outcome of any one trade, since they’ve mastered the ability to think in probabilities.

In the Tao Te Ching, Lao-Tzu wrote: “There is no greater illusion than fear. Whoever can see through all fear will be safe.”

The remedy is to be a hunter – to make fear your prey. Have the courage to look it in the face, see it for what it is, and chase it down. Allow fear to propel you forward, to motivate and challenge you, rather than keeping you frozen and stuck.

Facing the wind is a metaphor for  looking directly at something — for fighting greater odds. Visualize fear as the wind. Face it, and then follow through with controlled, decisive, and smooth action. In this way, fear becomes an opening, not a closing — and you are one step closer to getting what you want from the markets.

4 thoughts on “Mastering Fear in trading”