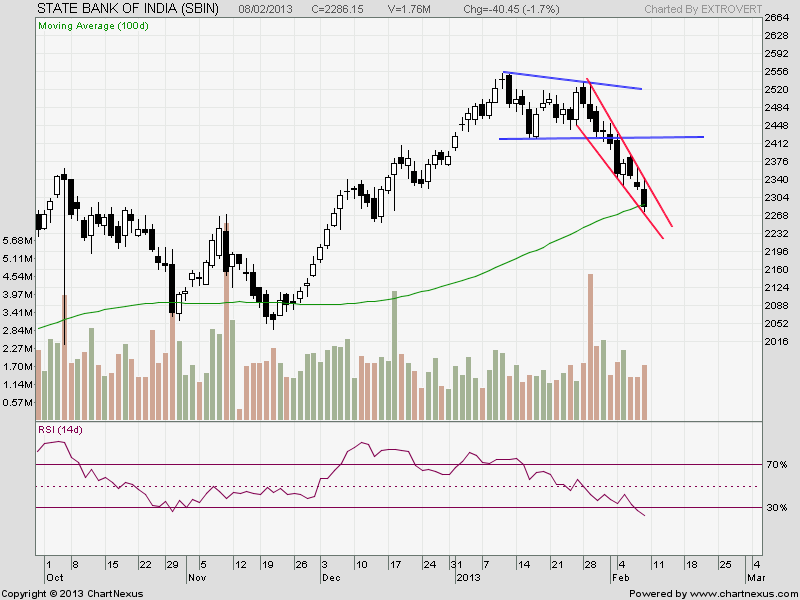 SBI has been falling relentlessly from 2535 till 2276, As discussed on 29 Jan unable to cross 2550 SBI can start short term decline, Stock took support at 2420 levels for 3 days as soon as closed below 2420 downside breakout happened with a quick decline till  2276.  SBI is now at important support of 100 DMA @2290. As seen in past stock consolidates near 100 DMA for 2-3 trading sessions and ultimately show a move up. Will it be 3 time lucky? IVRCL we covered extensively during the panic fall in mid January, after breaking 37 which was multiple support, it has become a resistance which IVRCL is unable to break.Now IVRCL has formed a small descending triangle with base at 31.  Break of 31 will lead to again important support of 28. Descending triangle pattern target,once 31 is broken on closing basis comes to Rs 26 in 1 month time frame. TCS was on rise after Cognizant gave better than expected results, Stock rose with volumes but unable to cross the swing high og 1440. Till 1440 is not broken short term trend remain Sell on Rise with Strict sl of 1440.