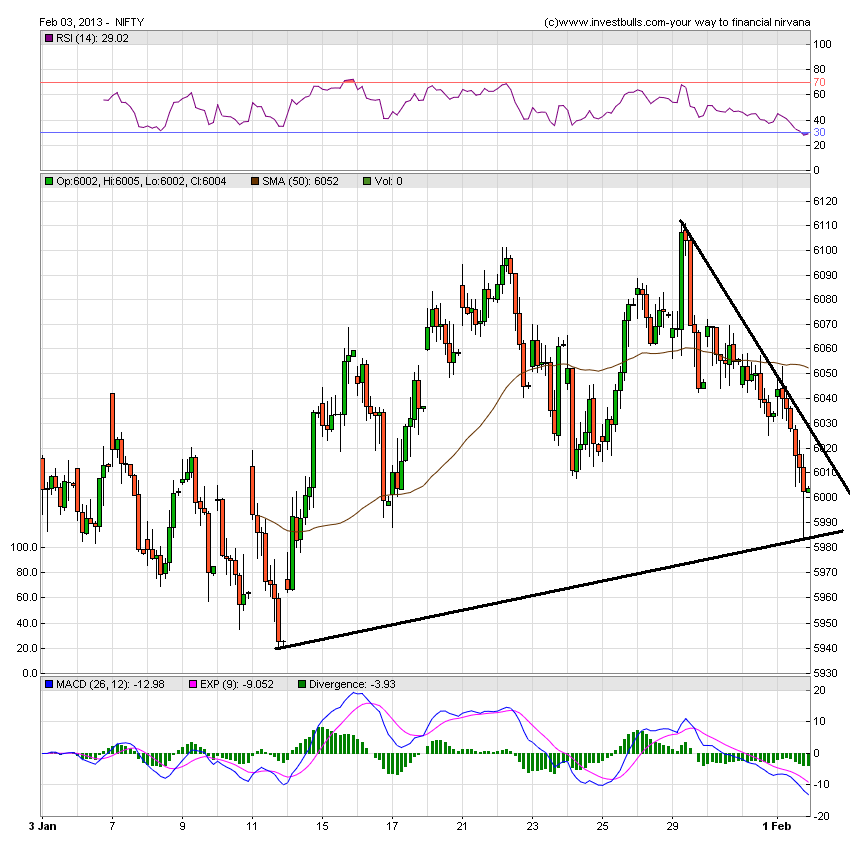 RBI delivered what market was expecting cut in Repo and CRR but Nifty has been down from past 5 trading session. As the rate cut had already been factored in by the markets and profit booking followed. Many traders were surprised the way Nifty behaved, market always behave irrationally and its always better to trade as per levels. We are saying from past 2 weeks till 6100 is not broken on closing basis, Trend remains Sell on Rise and Nifty is obliging to it. Government has announced the Budget session dates, Railway Budget on 26 Feb and Annual Budget on 28 Feb which is also expiry day. So rise in volatility should be expected as the event comes near. Nifty is trading below 50 SMA which lies at 6052. Nifty made a brief move above 6100 made a new 52 week high of 6112 only to fall back below Weekly Trend Deciding level of 6100 and falling all the way to 5998. Hourly charts are in oversold zone and Bounce back till 50 SMA can be expected.

Technically till 6100 is not broken on closing basis Nifty will continue with its trend of Sell on Rise . This is what we discussed in Jan 25 analysis  and Nifty made a High of 6112 after RBI rate cut  and again turned back and made low till 5984 hope traders made use of analysis were able to benefit out of the rally. Coming week nifty has broken out of rising wedge pattern and Next level of support comes at 5940 range. MACD indicator gave a SELL RSI broke 50 and Stoch is also in Sell mode. 5945 which was previous high should act as support, below that 5890. As discussed earlier Fibonacci fan helps in finding potential tops and Bottom of market from short term prospective.We have used Weekly chart and applied Fibo Fans, Nifty has closed below the Fibo Fan support of 6040 on weekly basis. Next Support comes near 5890. So fall till 5890 can be expected if 6040 is not captured in next 2 days. Nifty has formed bearish engulfing  candlestick pattern closed the week negative with loss of 75 points @5998 and below the psychological level of 6000.Higher Highs formation is intact but Higher low  formation is breached with low of 5884  on Weekly charts and Nifty is near the crucial trendline support of 5940-5980 region.