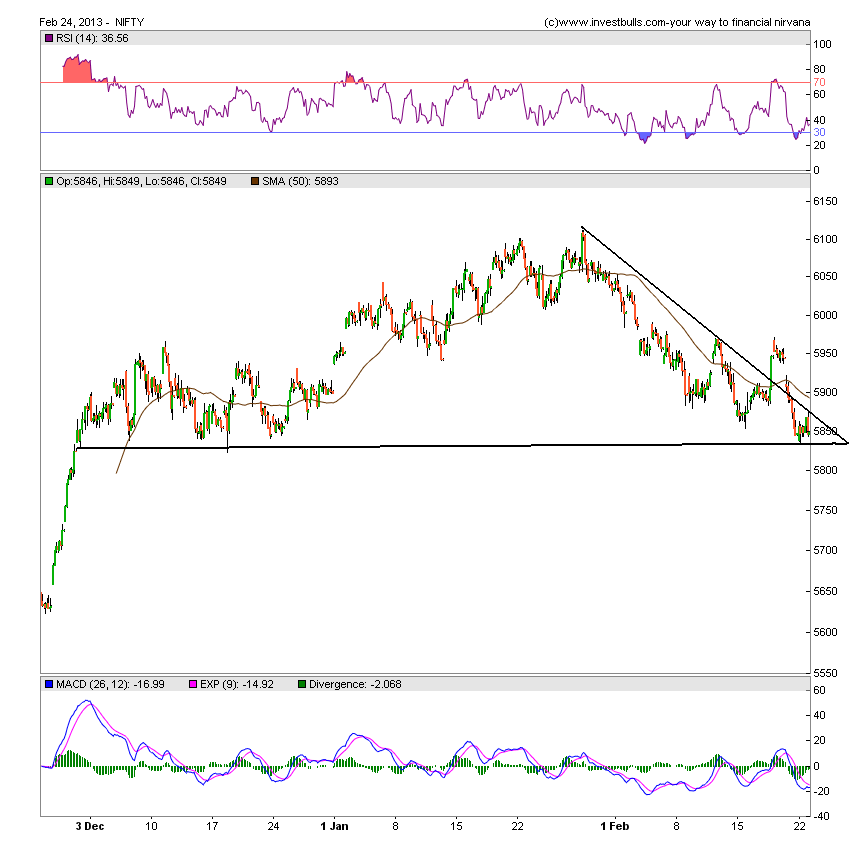 Bears kept ruling the Dalal Street for 4 week in row as Sensex and Nifty closed at 2013 low, with Nifty closing with cut of 0.6%, .Next week stocks will sway as per FM talks as he will present the most waited event the Union Budget on 28 Feb Railway Budget of 26 and Economic Survey on 27 will be tabled in parliament.  To add spice to trading its the expiry week also, So Bumper Dhamkha and rise in volatility will be seen.  As per Last week Analysis Nifty moved above Weekly trend deciding level of 5915 makes the exact high at 5970 which is first resistance turned back and went till support 2 of 5830 Nifty is trading below 50 SMA which lies at 5893. On Hourly charts Nifty is forming a descending triangle with breakout below 5815. One good thing happened in recent correction is it took away excessive enthusiasm from market participant thinking it will be a bumper Budget, expectation are at all time low and even if we have a so so budget market can rally.

For Nifty traders who follow gap trading there are 1 trade gaps in the range of  5700-6000. Most of the gaps have been fulfilled in current correction only 1 is reaming

T.As seen in below chart Nifty after  having broken the 8 months old Trend line green color which it was holding from the low of 4770 on both weekly and daily basis, has now become the resistance, so the brief upmove we saw in the last week took resistance at trendline and nifty pulled back, Resistance become Support as per classical technical analysis.

If we draw a trendline from low of 4531 Nifty seems to be holding that line for the time being. 5815-5840 range will be a crucial support for nifty next week holding the same rally can happen till 5950,unable to hold the same fall till 5600 can happen in panic. Positive Divergence can be seen in Daily charts in RSI and Stochastic as seen in above chart. So bounce back should be expected from 5838-5815 range. Traders carrying shorts better to do profit booking in the range. As discussed earlier Fibonacci fan helps in finding potential tops and Bottom of market from short term prospective.We have used Weekly chart and applied Fibo Fans, Nifty was able to close below the Fibo Fans support of 5880 which is negative  signs for Bulls, Next level of support comes at 5775 Nifty closed the week negative with loss of 37 points @5850.Lower Highs formation and Lower low  formation is intact with low of 5853  on Weekly charts.Volumes were on lower side,as traders and investor sit on sideline before the budget is announced,Nifty has been holding the green support line as in below charts.