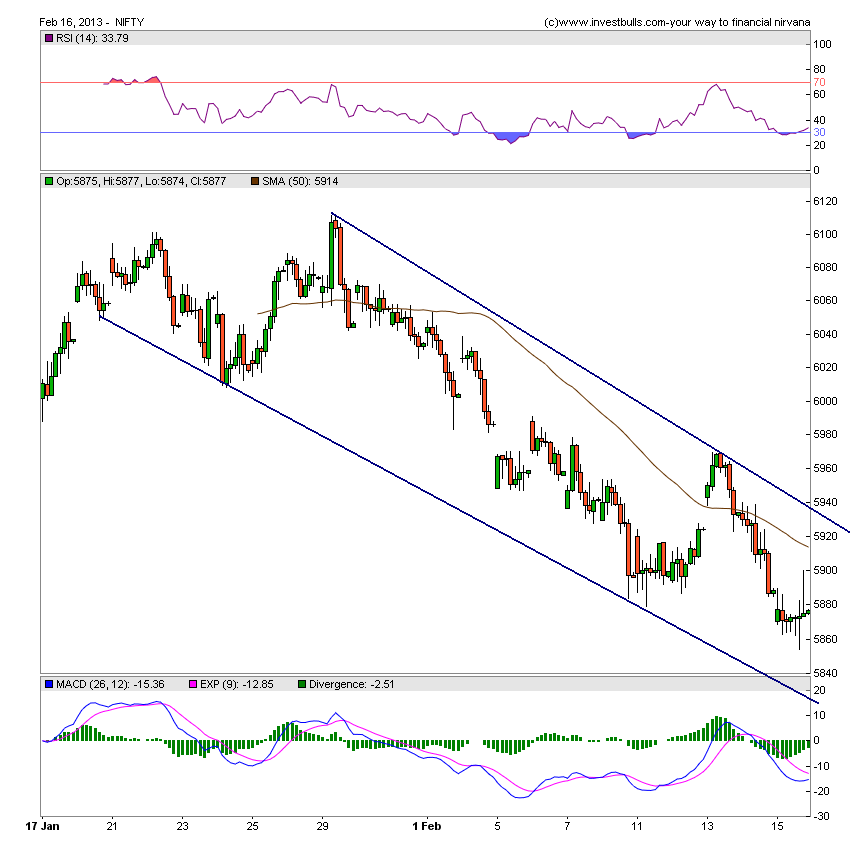 Bears kept ruling the Dalal Street for 3 week in row as Sensex and Nifty closed at 2013 low, with Nifty closing with cut of 0.3%, .Headline Inflation cooled off to 6.6% lowest in Jan with Core Inflation also coming at 4%, IIP data continued to be dismal at -0.6%. Moody warning of widening CAD has fizzled the optimism of improvement in Inflation. Budget is coming near and stock specific action will be name of the game. Nifty is trading below 50 SMA which lies at 5914. Nifty made a brief move above 5969 to fall back below Weekly Trend Deciding level of 5945 and made a low of  5854. Traders following weekly analysis would have been able to make some good money.

For Nifty traders who follow gap trading there are 1 trade gaps in the range of  5700-6000. Most of the gaps have been fulfilled in current correction only 1 is reaming

Technically till 6100 is not broken on closing basis Nifty will continue with its trend of Sell on Rise . This is what we discussed in Jan 25 analysis  and Nifty made a High of 6112 after RBI rate cut  and again turned back and made low till 5853 hope traders made use of analysis were able to benefit out of the fall.As seen in below chart Nifty and Sensex  both have broken the 8 months old Trend line green color which it was holding from the low of 4770 on both weekly and daily basis, which is a bearish sign. Next level of Support comes at 5830-15 range which has been resistance in past. Resistance become Support as per classical technical analysis. Positive Divergence can be seen in Daily charts in RSI and Stochastic as seen in above chart. So bounceback should be expected from 5838-5815 range. Traders carrying shorts better to do profit booking in the range. As discussed earlier Fibonacci fan helps in finding potential tops and Bottom of market from short term prospective.We have used Weekly chart and applied Fibo Fans, Nifty was unable to close below the Fibo Fans support of 5880 which is positive signs for Bulls, Now let for confirmation with a follow up move next week. Nifty has formed spinning top  candlestick pattern closed the week negative with loss of 16 points @5887.After a long decline or long black candlestick, a spinning top indicates weakness among the bears and a potential change or interruption in trend.Lower Highs formation and Lower low  formation is intact with low of 5854  on Weekly charts.